Stockport Town produced a memorable comeback to beat Abbey Hulton United after being 2-0 down with 20 minutes to play. 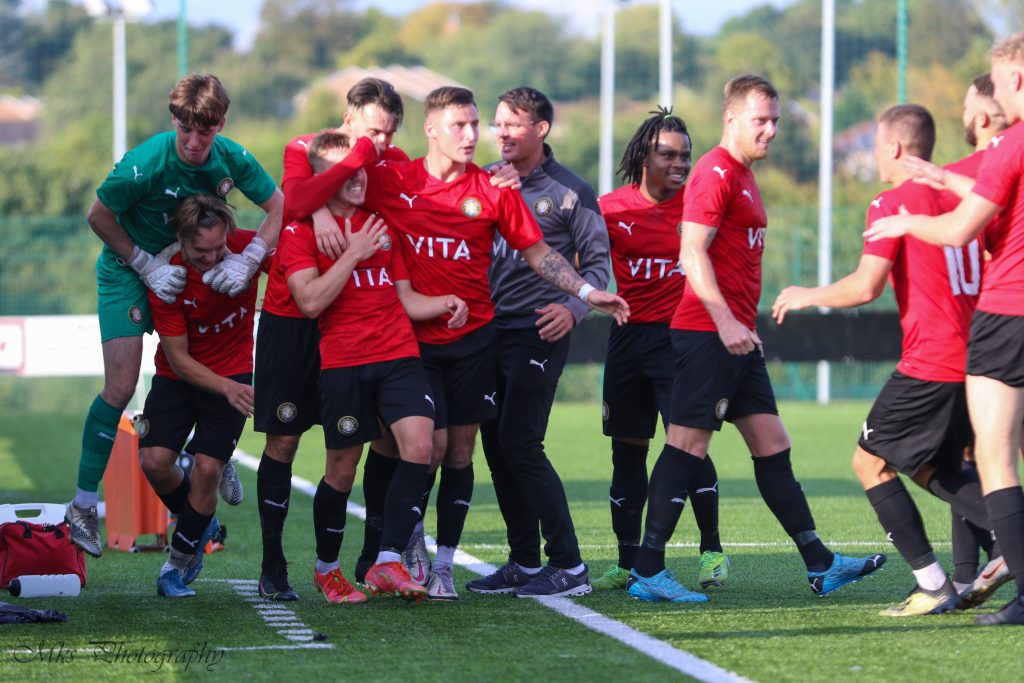 Town leave it late, but take all three points

Will Calligan’s 96th minute free kick secured a vital three points for Matt Jansen’s side to halt a run of five straight defeats in NWC Division One South.

Town found themselves chasing the game after Tyler Barnes and Lee Cropper put the away side ahead, but showed great fight to get back into the game and seal it with a late victory.

Stockport captain Paul Turnbull levelled the scoreline for his side stop, with his shot from the corner of the box clearing everybody.

Hulton were 2-0 up after Cropper scored a wonder goal straight from a corner, looping into the top of Josh Schofield’s goal.

The home side responded well after both goals, and hit the woodwork twice, with Leandro Tanswell Vargas and Tom Beckett hitting the post and crossbar respectively with the score at 1-0.

Cropper had a goal chalked off for offside at 1-0, and had that goal stood, the result could have been very different.

The home side found themselves chasing the game despite having the majority of possession and chances in the first half.

Abbey Hulton lead at half time

Barnes’ 42nd minute strike was the difference at half time, with Stockport Town ruing not taking advantage of several opportunities to open the scoring.

Town had far more possession and chances than the visitors in the first 45, but were unable to convert any of them.

They started the game well, forcing four corners in the first five minutes, and Turnbull wasn’t far away with a free kick in the first couple of minutes. Pointon acrobatically kept it out, tipping the ball over the bar.

Max Greenhalgh and Tom Beckett also came close to breaking the deadlock within quick succession, but without really testing Pointon in the away goal.

Hulton first threatened Josh Schofield’s goal through Kevyn Davies’ close-range shot from Anthony Malbon’s cross-box pass, but the young keeper was equal to the attempt and put it out for a corner.

Visiting striker Malbon went into the referee’s book just before the break and earned himself a ten minute spell in the sin bin after telling referee Ashton Wroe exactly what he thought of one of his decisions following a high challenge.

Pointon was injured with 12 minutes to play, leaving substitute Adam Lawrence to deal with Town as they pushed for a late equaliser.

Jansen's side were missing joint top scorers Mike Elstone and Max Dickov through injury, but found goals from other areas of the pitch to compensate.

Town’s next fixture is a week today as they travel to Brocton.

Greater Manchester's teams pulled off some big wins in the FA Vase ...

It was a good day for Greater Manchester's National League sides, with ...