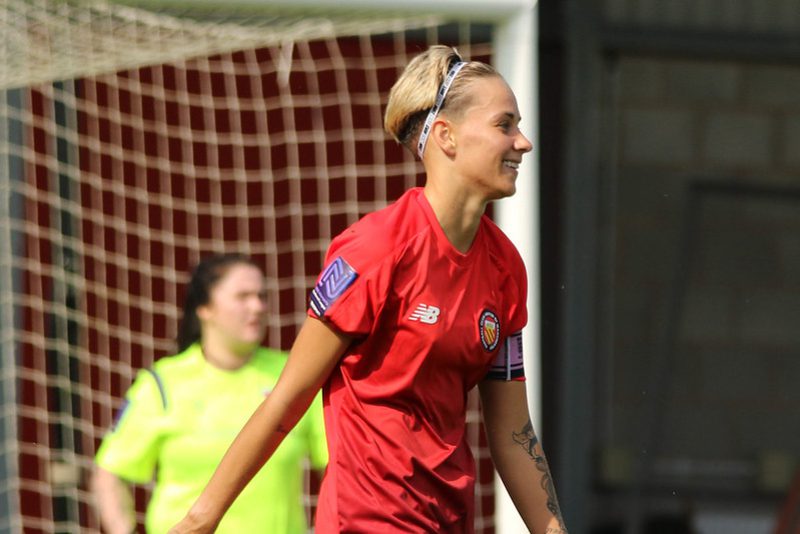 The Broadhurst Park side go into the away game full of belief having won three consecutive games in the National League Division One North.

After a rocky start, FC have leapt up the table to fourth in their first season at this level, with Chambers netting five goals last weekend in a 6-2 victory over Alnwick Town.

Tom Fitton’s side now head to the coast to take on Fylde, who are currently top of the Northern Premier League, one step higher than FC United.

“The mood in the camp couldn’t be any better at the moment. The positive vibes are there from everyone. The energy is on another level at the moment. .

“We’re not expected to win this game on Sunday, but we fully believe that we’re capable of doing so. We’re not oblivious to how good Fylde are. This game couldn’t be at a more perfect time for us – the wins in the last few weeks have made us so confident, and we’re ready for any game that’s put in front of us. We’re relaxed and will enjoy it.

“When you play a lower division side in the Cup there’s pressure on you – you have to win that game. We hope Fylde feel like that. They’ll either underestimate us, or have the thought they have to beat us, and put out their strongest squad. It will be a good experience for us to play the league above and for us to showcase where we stand in the pyramid. If we get a result it just shows that we can go further,” she said.

The side have rapidly changed their fortunes, after starting the season with two defeats to Newcastle United and Chester le Street, shipping ten goals in the process.

A 6-0 opening day defeat is far from the ideal start to any club’s season, a game in which Chambers acknowledges all of the team, including herself, just didn’t perform.

Since those defeats, impressive wins over Bradford City, Barnsley and last week’s romp over Alnwick have followed.

Chambers admits the squad had a rude awakening in their first game at this level, having successfully applied for promotion after Covid prematurely ended their season two years in a row. The 27-year-old believes the squad are still adjusting to life at this level, with an additional training session a week, less recovery time and more physical opponents all contributing to a high number of early season injuries.

“That game happened at the right time, it opened our eyes a little bit. It made us aware how tough this league is. It was a difficult defeat to take, because we’re not used to losing, let alone by a margin of 6-0. “We take full blame for that defeat. We’re so used to winning, we might have been a bit complacent. We realised it’s a big step up, bigger than we originally thought.  We don’t ever want to feel like we did after the Newcastle game ever again. It’s definitely character building.

“I’m glad we’ve got the defeats out of the way because it helps us move forward. It’s a new experience for us all – we’re in a new division with a new manager and new players.

“The fight within the team has stemmed from the Newcastle game. We’re progressing. The fight and desire is unreal now going into games.

Bagging five goals last weekend has seen Chambers rise to the top of the goalscoring charts in the division.

She now has seven for the season, but insists without her teammates her five-star performance wouldn’t have been possible.

Chambers – who works in childcare away from the pitch – also says the whole club are learning as they go in uncharted territory.

“It was an unreal game to be involved with. I never expected to be scoring five goals in this division, or even the lower one last year. It was a real confidence boost. I was fortunate enough to score the goals, but I wouldn’t have scored them without my teammates. They deserve the credit just as much as I do. “We don’t really know what to expect in this new league, we have to take  every game as it comes. We’re adapting to the physicality of the league, it’s a big step up from what we’re used to.  The season so far has been a learning curve. I think we’ve found our feet quite quickly and we’ve shown what we’re capable of. We want to improve and get better week by week. We’re in a really good position,” she said.

Now in her tenth season at FC, Chambers has been captain for nine years – successfully keeping the position as new managers come and go.

It’s a role she doesn’t take as a given, and is now mature enough to recognise a new manager may want to bring his own player in or go with someone else.

In her own words, she admits she was a ‘bit of a hot head’ in her younger years, and perhaps a little immature.

In that time she has also seen a dramatic improvement in the facilities for her team as women’s football continues to grow – both at the club and in the wider community.

There are plans in place for the women to train alongside the men, and work more closely for events like award nights and end of season presentations.

“At the time, it was a bit of a tactical decision giving me the responsibility of being captain.  They thought I might calm down a bit, because everyone’s looking up to me. I’ve proven myself since then. When a new manager comes in I’m completely open. I wouldn’t like them to think they can’t change it just because I’ve been there for so long.“The facilities here are just unreal. We used to play on the fields across the road from Broadhurst Park. Fans were having to pick up dog poo off the pitch, there were holes in the pitch and we were putting our own nets up. “The progression from then to what we have now is unbelievable. There’s no one in the league we’re in, or potentially the one above, that has the facilities we have.  It’s unreal to see the changes and progress over the years. The only way is up.  “You feel lucky to be a part of the club. As a female player, you pay close attention to the backing you get from the male side of the club. The club backs the women’s side just as much as the men’s.  Both sides want the same success, so why not work together?,” she said.