With a Manchester City Vs Chelsea final making an English winner inevitable, we look back at the last 5 English Champions League-winning teams. 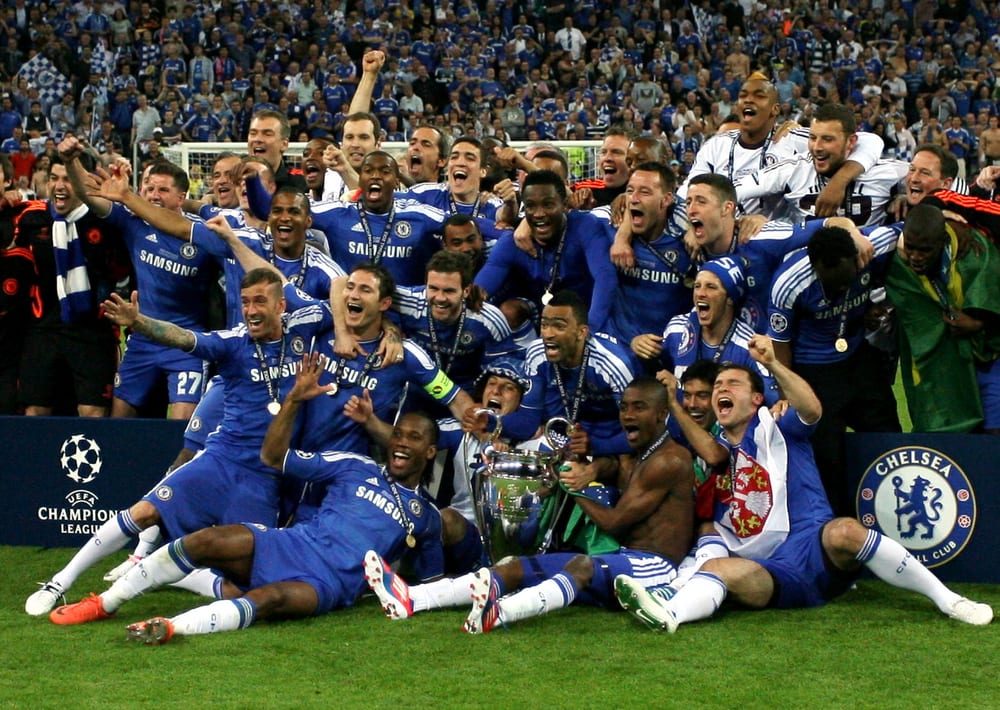 The English love a great underdog story, so it is probably no surprise that some of the nation’s greatest club footballing triumphs on the continent have been particularly hard-earned.

For all Sir Alex Ferguson had done domestically at Manchester United, transforming a struggling side into a true behemoth with unprecedented Premier League dominance, success on the biggest stage in Europe had eluded him.

United had won the European Cup Winners Cup in 1991, but as the decade came to a close they had only managed to reach the semi-finals of the Champions League once, before being summarily dumped out by Borussia Dortmund.

1998-99 was different though. Despite winning just two of the first six games in the group stages, United had qualified for the knockout stage from a group that contained a Barcelona side that had dumped them out of the competition just a few years earlier. Dramatic victories over Inter Milan and Juventus followed to set up a final against Bayern Munich that no fan would soon forget.

After trailing for much of the match, United turned the game on its head in the final moments, as goals from substitutes Teddy Sheringham and Ole Gunnar Solskjaer capped off an incredible victory.

Presumably not content with rivals United winning the big trophy in the most dramatic fashion imaginable, the Liverpool Champions League-winning side of 2005 somehow managed to lift the trophy despite facing even more perilous circumstances.

After barely even making it into the competition via a victory over Austrian side Grazer AK in the third qualifying round, a Liverpool team that had failed to make the top four in the Premier League the previous season was tasked with facing Europe’s elite.

From then on, at every turn throughout the competition, it appeared that Rafa Benitez’s men were in danger of being knocked out, and yet somehow they hung on time and time again.

Wins over Bayern Leverkusen, Juventus, and Jose Mourhino’s seemingly unstoppable Chelsea did inspire confidence, but many assumed that defeating Italian giants AC Milan in the final would prove to be a bridge too far.

And for the first half, they were right.

Liverpool went into half time in Istanbul three goals down and seemingly out. However, an inspired second-half performance, led by Steven Gerrard saw the Reds battle back to 3-3 before overcoming all odds to win on penalties.

After establishing an unprecedented run of dominance in the 1990s Manchester United had undergone a period of upheaval in the mid-2000s winning the league title just once between 2001 and 2006.

Sir Alex Ferguson had been rebuilding his side during that time, however, and the revitalised side, combined with the emergence of Cristiano Ronaldo as one of the greatest players in the history of the Premier League had once again cemented United as the team to beat domestically.

In the Champions League, United qualified for the knockout stages after comfortably winning their group. Victories over Lyon and Roma followed before United were handed their toughest test in the form of a burgeoning Barcelona side that would go on to be one of the best teams in world football.

United prevailed thanks to a screamer in the second leg from Paul Scholes to set up an all-English final against Chelsea in Moscow.

Once again, the match ended dramatically as the game was forced to penalties. An infamous miss from Chelsea captain John Terry was enough to secure Sir Alex’s second, and final Champions League trophy with the club.

If this list hasn’t made it clear thus far, there appears to be a recurring theme as English clubs managing to find success in Europe is never as straightforward as it possibly could be.

Possibly conscious of not breaking the trend, the Chelsea team of 2011-12 managed to have one of their most disastrous domestic campaigns in years, even sacking head coach Andre Villas-Boas midway through the season, and yet in the same season still managed to achieve European glory for the first time in the club’s history.

The Club came back from a 3-1 defeat in the first leg of the round of 16 of the competition against Napoli, and then enjoyed a relatively stress-free pair of victories over Benfica to face off against Barcelona in the semis.

As you can expect, a fixture of such magnitude was not devoid of that all-important drama, as a last-minute Fernando Torres goal brought the club into their first Champions League final.

A hard-fought battle with Bayern Munich ensued in the final, but with the scores level after 120 minutes of play, the club managed to emerge victorious courtesy of a penalty shootout.

After enduring a period that is probably most academically described as a ‘banter era’ during the early 2010s, Liverpool enjoyed a new lease of life under the stewardship of Jurgen Klopp leading to a historic victory in Madrid.

But they didn’t make it easy for themselves.

Klopp’s side had struggled through the group stages, losing three of their opening six games in the competition to just barely scrape through to the knockout phase at the expense of third-placed Napoli based on goals scored.

Wins over Bayern Munich and Porto in the round of 16 and quarter-finals respectively demonstrated the team building momentum but a comprehensive 3-0 defeat at the hands of Barcelona appeared to have ended the team’s ambitions of reaching the final.

However, Klopp’s side flipped the script in the second leg, battering the Catalan club 4-0 to reach their first European final in over a decade. In an all-English showdown, the Reds held their nerve in Madrid to defeat Tottenham 2-0 in the final and be crowned champions of Europe for a sixth time.

With hopes high for the Three Lions this summer, we look back ...

Highlights From The Weirdest Champions League So Far The curtain has finally ...