In Short: Zero Fans, A Sh*tload of Action! 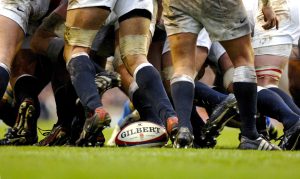 We take a look at everything that happened during the opening weekend of the Six Nations, including England’s shocker in the Calcutta Cup.

There was a lot to talk about for this highly-anticipated Six Nations, and the opening weekend definitely didn’t disappoint. If you’re an England fan, however, then forget what was just said, it was probably the most disappointed you’ve been in a while.

From red cards, to an absolute thrashing, each of the three games had their own talking points. If you’re English, though, you may not want to talk about those particular points.

What on Earth happened to England? Disappointing, underwhelming – just two accurate words to describe England’s loss in the Calcutta Cup. Their lacklustre performance gave Scotland the best opportunity to beat them, and that’s one they took advantage of.

Obviously fed up with losing to England every time, they almost accepted defeat before they stepped onto the field. However, Scotland saw the opportunity and grabbed on with both hands, to gain their first win at Twickenham in 38 years.

England are reigning champions of the Six Nations after winning the tournament last year, and were heavy favourites to win this opening game. It didn’t look like Scotland were much of a threat, and didn’t stand a chance of winning. Apparently, the boys in blue had other plans.

England were poor for pretty much the full game, and never showed any real threat or danger. They didn’t even score a try. It was almost too easy for Scotland to win the battle.

Following the loss, England head coach Eddie Jones even admitted that England ‘let the country down’ with, let’s be honest, a dismal performance. You know that’s how bad England were if their head coach is saying that.

England now need to bounce back against a poor Italy side. Meanwhile, Scotland are on a high, and will want to take this confidence into what will be another gruelling battle with Wales.

France put 50 points up in the opening game of the tournament – now that’s a statement. England should have taken notes in their game that followed. On the other hand, it is Italy’s 28th consecutive loss in the Six Nations. Ouch.

Yes, Italy haven’t got off to the best start. They can already see flashbacks of previous years, and any hope or optimism from fans has definitely been squashed in the opener. The Italians are probably starting to have nightmares about adding another wooden spoon to their collection, which would take their total up to 16. That’s a lot of wooden spoons.

Ex-Welsh captain Sam Warburton was on coverage of the game, and he didn’t hold back his thoughts of the Italians, saying “Italy aren’t good enough” and has called for promotion and relegation to be introduced to let others compete in the prestigious competition. Only time will tell, but is it possible?

France showed their quality in the thrashing, and showed their dominance with a great performance. It was a strong statement made, and has definitely put the rest of the teams on notice. With a matchup against Ireland in their sights, they will look to keep their momentum.

Meanwhile, could Italy bounce back against England – who also need a win after a poor opener? Who knows, but don’t hold your breath.

Sunday’s match was a close encounter, but Wales scraped past their opponents for the win. The 14th minute red card shown to Ireland’s Peter O’Mahoney was a definite influence on the result. It was a reckless elbow, and is worthy of a red card. No arguments here.

However, despite being a man down, Ireland took the fight to Wales, not willing to give up in what was a tense contest. The forwards in red dominated the tackle charts in a bruising battle with the Irish, despite the 14 men in green enjoying a lot of possession in the game.

It was a closely-fought contest, as expected, and both showed good performances to start the tournament. Irish fans shouldn’t be disheartened, despite the loss, as they did put in a good shift and were only narrowly defeated. They have to muster up all the courage now ahead of the weekend’s contest with France – one we are absolutely looking forward to.

One big downside for the Welsh is their loss of four players due to injury during the 80 minutes. It has also been confirmed that they will all miss next weekend’s encounter against Scotland – who now probably have some confidence after they won their first game against all odds, after only conceding 6 points against the bookie’s favourites.