New Trafford captain Keil O’Brien admits he’s disappointed to be injured so early in the season - but is delighted to be wearing the armband for the first time in his career. 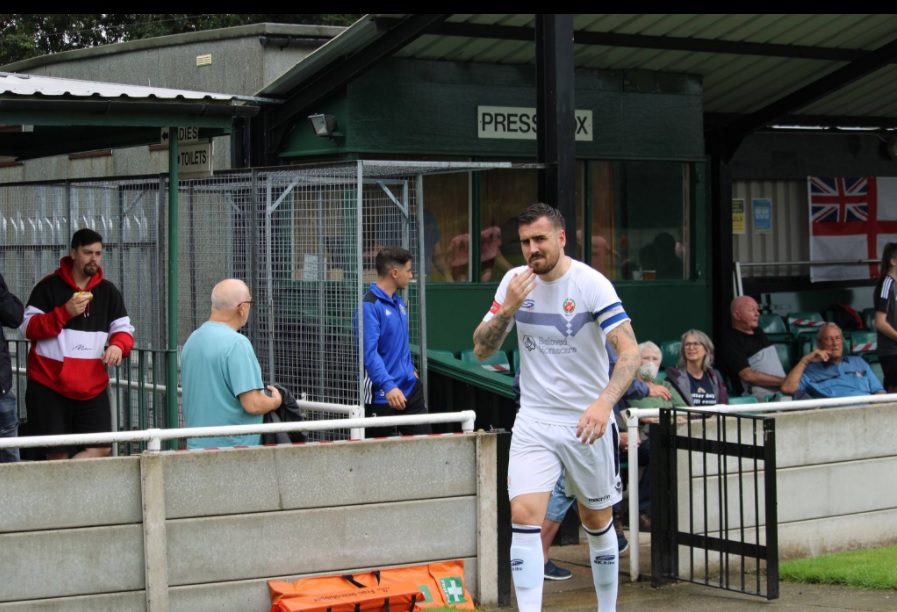 The 29-year-old tore his hamstring in the warm up for the club’s second game of the season against Leek Town and now faces up to two months on the sidelines.

The defender has struggled with a knee injury for much of his career, and has previously needed surgery.

“Everyone knows I needed a knee operation after finishing with Bury. I always knew I was going to get problems down the line with my hamstring. In the warm up at Leek I felt a bit of a twinge, but tried to carry on.  I thought it would be OK, but ended up tearing it and now I’m out for 6-8 weeks.

“It’s frustrating, after doing eight weeks of preseason and getting myself in top shape to be injured in the first week of the season.

“I’ve been here before, so I’ve got to work hard on getting myself match fit again.  In my day job I’m sat at a desk so I’m lucky I don’t do anything more strenuous,” he said.

No hesitation to accept captaincy

Injury is unwelcome at any time to a footballer, but it’s difficult not to feel some sympathy for O’Brien, who was installed as the club’s new captain over the summer.

The defender was manager Danny Caldecott’s first choice to take the armband after Oli Roberts decided to move onto league rivals Colne.

He at least got to lead the side out in their opening day home match against Roberts and his new team, picking up a point in a tight 1-1 draw.

He admits it’s an opportunity he’s been waiting for.

“Every player wants to be the captain at any club they play for. 0 I’m more vocal in the dressing room now, being one of the older members of the squad trying to help the younger lads. I’ll always just be myself whether I have the armbard or not. “When Danny asked me, it was unbelievable as I’ve always wanted to be captain. It was an easy decision for me. You just have the added pressure that when things are getting tough people are looking at me and the other older lads for answers,” he said.

Caldecott has previously described O’Brien as the team’s class clown, which he says is a fair assessment.

He has also praised his welcoming attitude to new players, but this doesn’t spare them from being ribbed once everyone is comfortable in each other’s presence.

“I like to have a laugh and a joke! You come to training and obviously you have to work hard , but you need to enjoy it as well after being at work all day. There’s one lad in the squad though, James Neild, that kid just doesn’t like to smile. I’ve been giving him a tough time since the start of the season,” he laughs.

Trafford may have played four games so far, but have only played two opponents - a quirk in the fixture list saw them play Colne three times in ten days in league and FA Cup preliminary round action, with a replay needed to separate the two sides. The Lancashire side eventually won the replay 2-1 and will face Stalybridge Celtic in the next round. The side have yet to win this season, but have two points on the board and have only tasted defeat in the FA Cup.

O’Brien admits the squad will be glad to see the back of Colne for now and test themselves against different opponents.

“It’s been crazy how the fixtures have fallen.  Every year since I’ve been here we get a team that we play 3-4 times in quick succession. It’s the luck of the draw. “As a team we’re frustrated so far, we want to win games by being a tough side to break down. In preseason we concentrated on keeping clean sheets and building from there. The manager prides himself on the team being hard to break down.

“In the first game, Colne had one chance and scored from a rebound.  We should have won against Leek with the amount of chances we made, but sometimes you don’t get the rub of the green.

“People need to remember that if you take myself, Matt Cooper, Astley Mulholland and Ross Davidson out of the squad the average age of the squad is probably 20.

“It’s a credit to Trafford some of the young talent we have in the squad.”

O’Brien has played for many clubs in his career, coming through Manchester United’s youth system before forging a career in non league.

His performances at Mossley and Chorley earned him a move back into the Football League with Bury, but his injury problems began and only played a handful of games out on loan at the likes of FC Halifax and Stalybridge.

A move to Australia followed to play for Moreland City, but he admits being so far away from his family was difficult and he was glad to return.

After a conversation with then manager Tom Baker, he joined Trafford in 2017 and bar a brief loan spell at Mossley, has been at Shawe View ever since.

“Trafford is a brilliant club. When I came back from Australia, I spoke to Tom about Trafford. It didn’t really work out under him, but when Danny took over he had a different take on things. He told me what he wanted from me and his aims.

“It’s a real family club. You get to a game and say hello to 20-30 people before you even step foot in the dressing room. These volunteers give up their Saturdays for the love of the game, so it’s a fantastic community club,” he said.

O’Brien has already racked up over 100 appearances for the club and, injury-permitting, should add many more to that before he hangs up his boots.