Max Dickov admits he has relished the challenge of playing semi-professional football, but the Stockport Town forward believes there is still plenty for him to learn. 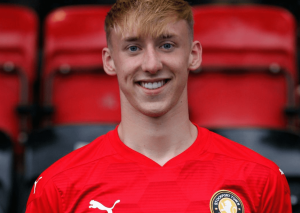 A tenacious attacker capable of playing a number of positions across the forward line, Dickov has impressed during his short stint in non-league, leading to a number of eyes tracking the young man’s progression.

Signing for NWCFL First Division South side Stockport Town at the start of the 2020/21 campaign, Dickov was one of many players left frustrated by the lack of football after the season was declared null and void. 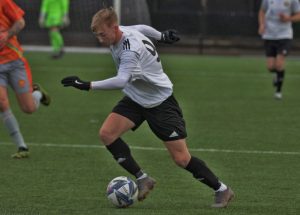 Now a year older Dickov is back amongst the goals for Stockport Town, yet despite his tender age, the former Oldham Athletic youth player has already shown maturity way beyond his years on and off the pitch:

“A couple of years ago I took the decision not to play academy football, so I went to sixth form to get my A-levels, but I also started to play men’s football because the experience on offer here is much better than playing against your own age groups”.

Following a brief stint at Manchester City as a child, Dickov was scouted for Oldham, yet after his year-long spell with the Greater Manchester club, they decided against offering him a scholarship.

Despite interest from elsewhere, Dickov chose not to pursue the well-trodden path of academy football, instead opting to sign for Stockport Town, where he admits his game has had to develop in order to succeed:

“When you are 17, 18 and playing against 30-year-olds it really does push you. When you are in academies, you’re rarely put into uncomfortable situations compared to playing open-age games against grown adults.

“I know for some players that route works, but for me choosing not to go to an academy has been the best thing possible, along with going to sixth form and getting an education too”.

Having been surrounded by football throughout his childhood, Max is the latest Dickov to chase a career in football, following his older brother Sam who joined Wythenshawe Amateurs in the summer and of course, his dad, Paul.

Similarly to Max, Paul had to make some tough decisions as a young player, swapping Premier League Arsenal for a City side in crisis, with the Livingston born man part of the Blues’ team that earned back-to-back promotions from Division One up to the top-flight in 1998/99 and 1999/00. 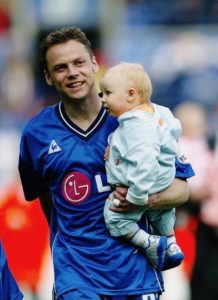 Scorer of the Blues’ crucial 95th-minute equalising goal in the 1998/99 playoff final against Gillingham, City were just one of 13 clubs Paul represented throughout his professional career, with the former Leicester City and Blackburn Rovers man now acting as a mentor for his sons.

Speaking with a noticeable perk in his voice, Max explained how he turns to his dad after every match for advice, with Dickov senior providing an honest assessment: 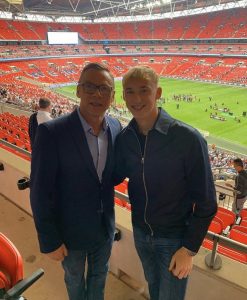 Having a dad that has scored over 100 goals across a career that spanned 21 years is proving invaluable for Max, with the advice shared by Paul helping the fledgling Stockport Town man to constantly improve his own game:

“He tells me it’s a given that players at this level and higher will be able to play, so it’s about being able to work harder than them and recognising the weaknesses of the opposition early enough so I can capitalise”.

Like his dad, Max has an eye for goal and following a difficult preseason that saw a number of changes at Stockport Sports Village, he is now confident the time has come for Stockport Town to start picking up the points needed to climb the division:

“It was a relatively tough start because of the things going on with the club at the time and we didn’t really have the strength in the squad that we do now, but it's clear to see each week we are getting stronger”. 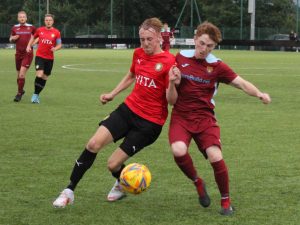 Netting his first goals of the campaign during a resounding 6-0 win over Rocester at the end of August, Dickov followed up his brace with a strike in Stockport Town’s 4-2 defeat to promotion-chasing New Mills, before adding a fourth of the season in their recent loss to FC Isle of Man.

However the 19-year-old is keen to add to what has already been an impressive start to the campaign:

“Individually I have had a decent first month or so of the season, I could’ve done better numbers-wise, but performance-wise I’ve been pleased. 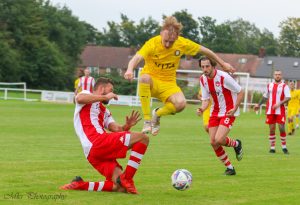 “Overall our ambition like many others is to get promoted and the squad is capable of making that happen but as much as scoring goals is great, as long as we win and get three points that’s the main thing for me.”

Dickov will look to add to his goals tally for the season when Stockport Town take on Cheadle Town in a rearranged league fixture this week, before a tricky test against playoff hopefuls Abbey Hulton United awaits on Saturday.