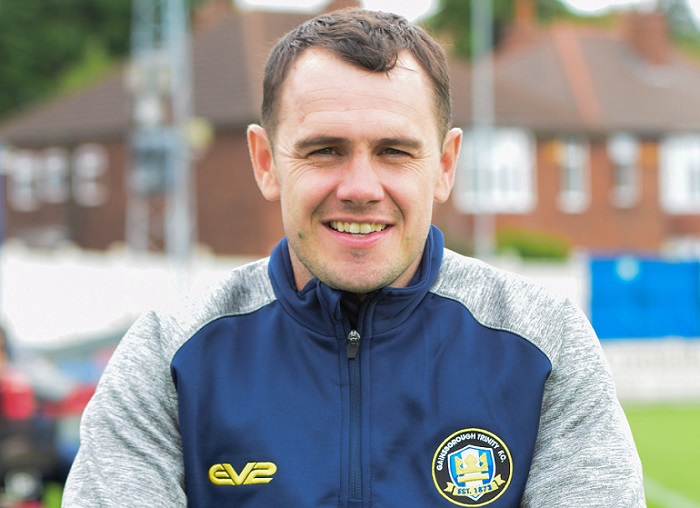 Embarking upon his first full season in charge of the club he used to captain, Gainsborough Trinity's joint-manager Liam King has been enthused by his side's opening displays, even if the results haven't yet married up with their efforts.

Competition is fierce in the BetVictor Northern Premier League Premier Division, and in their opening five games of the new campaign, the Holy Blues have already faced the current top three, taking their solitary victory against second-placed Whitby Town. An Ashley Worsfold double sealed that 2-0 home success, and they took a point from last season's beaten Play-off Super Finalists, Warrington Town.

It was a 4-2 loss last time out to Lancaster City, while narrow defeats to Nantwich Town and early pace-setters Matlock Town have been naturally frustrating for King and striker/joint-manager Ross Hannah. For former Rotherham United midfielder King, there has been plenty to build on, nevertheless.

"We started off with three good performances and we deserved more out of those performances," he said. "Matlock, we had a poor first half and then we turned it around and got back to 1-1, but individual errors just cost us."

"It’s fine lines in football, and we’re obviously not happy with the points total to start off, but bar the Lancaster game, we haven’t put in a really bad performance. It’s a tricky period when things aren’t going great, so we’ve just got to get ourselves out of it now."

The management duo took interim charge after Lee Sinnott's departure in mid-February and were confirmed as the club's chosen men for 2019/20 at the end of April. Former Bradford City striker Hannah spoke in detail on here in July, and expressed his gratitude to chairman Richard Kane for his show of faith in two young managers (with Hannah, 33, and King, 31).

Ex-North Ferriby United stalwart King racked up several hundred appearances as a player, but a back issue had prompted him to reassess his priorities and plans. Although the UEFA B-licenced coach admits the lure of throwing himself into the action again come match day remains, he is clear in his mind that there has to be a line between playing and managing.

"I’d love to play, but the thing for me is you can’t do both, it’s impossible. You need to have that manager status, in my opinion, and you need to distance yourself a bit from the lads.

"It’s no good you playing and trying to tell people what to do, it’s just impossible. I had to put my boots on in pre-season because we had seven people missing, so I had no choice but to play, and I noticed in that pre-season friendly it’s impossible to do both.

"I always have the urge to play, but I’m enjoying managing. It’s a total different ball game, management, and I’m new to it, I’m learning as I go."

With South Shields staying in the league after defeat to Warrington in the divisional play-off final in May, the likes of relegated FC United and Ashton United join a number of noteworthy potential contenders this time around, including Scarborough Athletic, the aforementioned sides leading the way so far, and more still on top of that. Gainsborough's aim is to return to the National League North they were relegated from in 2018, and there will surely be bundles of twists and turns in the months to come, as the days and nights get colder, and the pitches far less forgiving!

King knows how much of a sting the competition can provide if there is any drop in application.

"I think it’s a strong league, I think it always has been, to be honest. Everyone we’ve played has gone on to win their games, so we seem to be playing the ones that seem to be up there at the minute; your Warringtons, Nantwich, Matlock have had a good start.

"There’s no gimmes. I thought Lancaster were better than last year, but it’s a competitive league, and if you’re not on your game you’ll get punished.

"It’s good for non-league football as well how the competition’s rising and the standard’s getting better, the lower it goes down."

FA Cup duty calls tomorrow (7th September), as Trinity travel to Banbury United in their first round qualifying tie, but the league action returns when they host Jon Macken's Radcliffe on Tuesday (10th September) night. While possible improvements are never far from the thoughts - for any manager - King says he has belief in his current crop's capabilities.

"With the squad that we’ve started the season with, I spoke to everybody and said ‘you’ll get first opportunity,’ so if results aren’t going that way then that’s when you’ll look to bring players in. I’m always looking for anyone who’s going to strengthen the squad, but the lads that we’ve got currently are good enough to play at this level.

"Like I said, I think we’ve had an unlucky start to the season. It’s all about results at the end of the day, but if you’ve been watching us, you wouldn’t have thought we’ve got four points."

Game behind the name - Keeping it moving with Rod Orlando Young

The current campaign has held plenty of promise for Rod Orlando Young, ...