Chorley boss Jamie Vermiglio believes the gap between the clubs at the top of the National League and the sides below has never been bigger. 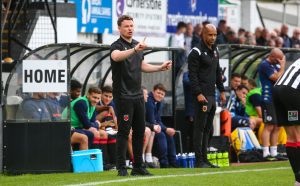 After experiencing what the fifth tier has to offer during Chorley’s brief spell in the division two seasons ago, Jamie Vermiglio admits he does not think the gap between the fifth and sixth tier has ever been bigger:

“Five or six years ago you could get promoted to the National League as a part-time club and have a fairer chance of competing.

“But now, a lot of the teams have realised you’ve got to go to a hybrid or full-time model to be able to compete.

With the majority of clubs in the National League now full-time, and with transfer fees being paid by club’s in the fifth tier higher than ever, Vermiglio believes more exposure has helped the league grow:

“The National League is a lot more exposed. It’s now televised every week, the FA Cup is televised more than it was, so there’s that exposure on the league that makes it more of an attractive appeal to players.

“Those teams that have been promoted and survived in the Football League are the clubs who are backed.

“It’s been a natural evolution for the league, especially with the teams that drop down already having a backing and can afford to stay full-time”.

Vermiglio happy with balance in promotion pushing Chorley side

Having originally joined the club as a player, Vermiglio took charge in 2018, before masterminding Chorley’s return to the National League after a 29-year absence in 2019.

Pipped to the National League North title by Stockport County in 2018/19, the Magpies went on to win the playoffs and Vermiglio is targeting another promotion-winning campaign this term:

“We’re just below the two points per game target we set at the start of the season… we’ve had some fantastic wins and the lads have started to get more and more confidence.

“We know the most difficult thing to do is find that little bit of consistency, but those teams that manage that find themselves at the top”.

Such is the great work Vermiglio has achieved with Chorley, the club handed him a contract extension in November 2021, with the 39-year-old excited about his future with the Magpies:

“I have a real affiliation with the club. If I wasn’t the manager, I would be rooting for them anyway. I am a Chorley supporter.

“The directors have ambitions to grow the club. We want to get back into the National League, but also into the Football League at some point”.

Change of approach for Vermiglio and Chorley

With experience of earning promotions in the past, Vermiglio is well versed on what it takes to get out of the sixth tier.

However, Vermiglio admitted to Non League Daily that he has undertaken a different approach to management this time around:

“We’ve taken on board some of the things that have worked for us in successful seasons, but there has been a shift in how we recruit players at the club.

“Our budget was reduced, so we have gone with a younger group of players who are part-time players with a full-time mentality”.

Adopting a youthful approach with his new-look Chorley side, Vermiglio has praised the fledgling Magpies squad:

“Our average age is 22 and a half, and they’re players that have been at Football League clubs, who are working really hard to return to playing football full-time.

“You can have a group of experienced lads like we have in the past and it will get you some success, but you can’t grow with a team like that. It’s probably the case for the players we had in the past”.

Having demonstratable promotion-winning experience with the club he is currently at, don’t bet against Vermiglio and Chorley making a return to the National League come the end of the season.