A Ryan Colclough penalty five minutes from time secured Altrincham’s first home victory of the season, whilst it was a day of differing results for Stockport County and Curzon Ashton.

Amazing Alty Come From Behind to Snatch Win 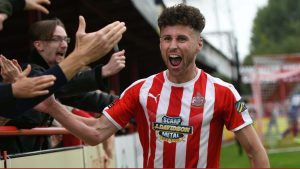 Despite entering the fixture on minus 12 points at the foot of the National League table, Dover Athletic travelled to Greater Manchester with the intention of competing for a result and duly took the lead early on.

Slotting home just eight minutes into the tie, Koby Arthur’s strike had given Dover an unlikely lead, yet the visitors were quickly pegged back courtesy of a Dan Mooney goal midway through the first period.

From there on in it had seemed like Alty would go and assert themselves, yet the division’s last-place club once again found themselves in front, this time through AFC Wimbledon loanee, Aaron Cosgrove.

However, it didn’t take long for the pre-match favourites to strike again, hitting two quick-fire goals to put themselves in front. A-Jay Leitch-Smith equalised with 20 minutes to play before Colclough secured the three points for the Robins from the spot.

Stockport County kept their third consecutive clean sheet, yet the preseason favourites were once again left disappointed as they failed to find the net in their 0-0 draw away to Boreham Wood.

Following their goalless draw at home to Grimsby in midweek, Simon Rusk urged his players to be more positive when they travelled to early-season high-flyers Boreham Wood, yet the Hatters were once again kept at bay.

Jordan Keane came closest for the visitors, hitting the post from a drilled shot with just 10-minutes to play, yet the league’s big-spenders struggled to break down a resilient Wood defence.

That’s now just two goals scored in four league matches for the Hatters, who have slumped to 13th in the fledgling National League table. It could get even worse for the promotion hopefuls, who are winless in their last six home matches, with Yeovil Town the visitors to Edgeley Park next Saturday.

Adam Thomas netted once again for Curzon Ashton as they made it two wins in their last two with a convincing 3-0 triumph away to Leamington.

Former County winger, Thomas opened the scoring after 16-minutes, whilst Dominic Knowles added a second just before the break.

Looking for their third win of the campaign, Steve Cunningham’s side sealed the victory midway through the second period through Nash midfielder Dale Whitham.

Moving up to fourth-place with the result, Curzon will be dreaming of an unlikely playoff push and will welcome Gloucester in their next fixture.