Buxton FC midfielder Ben Milnes may have spent four happy seasons at FA Cup rivals Kettering Town - but he will be even happier to score against his old side on Saturday. 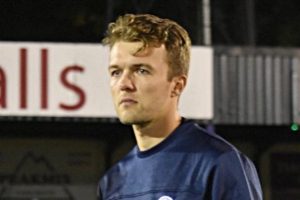 Northern Premier League side Buxton travel to Latimer Road in the competitions’ fourth and final qualifying round.

The 30-year-old - who joined the Bucks from Kettering over the summer - has quickly settled in at his new club and already has 15 appearances under his belt.

He said:  “I’d be delighted to score on Saturday. I always am no matter who it’s against. My loyalties now lie with Buxton! If I can get a goal on Saturday, then fantastic.  I scored on my debut, but haven’t managed to add to it since.

“When the draw came out, I thought to myself ‘it had to be’. It’s a tough draw, an away game at a team in a higher division.  Kettering have had a good start to the season.  I think we have a good squad, and we will go there with plenty of confidence”.

Milnes did sit down with National League North side Kettering in the close season but opted to move on, and signed with Buxton after being impressed with the ambition shown by chairman David Hopkins.

Milnes was part of a championship-winning side at Kettering, having helped them to win the Southern Premier League Central Division in 2018/19 which lifted them to their current step in the pyramid.

The impressive work undertaken at Buxton’s Silverlands ground in recent times - including new changing rooms and the installation of a 4G pitch - helped convince Milnes Buxton was the club for him.

“The chairman has big plans for the club, and he wants to do things the right way. I spoke with him and thought ‘go for it’.  They’ve done a lot of work on the facilities, and they want to get out of that league ASAP.  It’s a tough league, but we’ve had a good start.

“I decided in the summer it was time for a fresh start. It was nothing against Kettering, I have good memories from my time there but it was time for a new challenge. Now I want to help Buxton get out of the NPL” he said.

Things are going well for Buxton, who remain unbeaten in the league and lie third in the table behind early leaders Matlock Town and South Shields. Milnes - a financial advisor day-to-day - admits they would have grabbed that start with both hands before the season began.

The club have games in hand on both sides above them, although they have yet to play either of the early front runners.

It’s perhaps a sign of that ambition that there’s still an air of disappointment in Milnes while he talks about drawing games.

“We have dropped a couple of points, drawing games you’d expect us to win.  We gave two silly goals away against Morpeth.  They seem to be in a false position, they have a good squad and a new manager. I don’t expect them to stay near the bottom of the table.

“You look at games like Gainsborough and Ashton where again you’d expect a win looking at the table, but there are no easy games and it’s always difficult to get a result on someone else's patch.

“We’re in a good position - we’re still involved in the FA Cup and third in the league - we’ll definitely take that!” he said.

Kettering Town vs Buxton is a 3pm kick-off on Saturday, October 16. The winners will take a place in the first round proper and a cheque for £9,375.