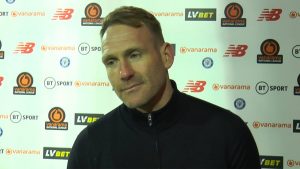 Passing up a number of chances to win the match on the night, Rusk was left frustrated with his side’s wasteful finishing in front of goal.

Alex Reid and Paddy Madden both passed up key chances to win the match either side of half-time, instead the Hatters’ winless run at home now stretches to six matches.

Despite the disappointment, Rusk was quick to commend the Edgeley Park faithful: “The supporters tonight were absolutely terrific. The way they were behind the lads and the energy inside the stadium was outstanding”. 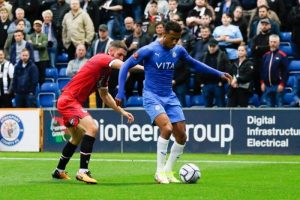 Playing their first home fixture under the lights since restrictions were lifted, over 6,000 fans packed into Edgeley Park, including 1,200 travelling supporters from Grimsby.

Bad Day at the Office to Blame

After defeat in the opening game of the season to Dagenham & Redbridge, Tuesday’s result means Stockport are still waiting for their first home win of the campaign.

Rusk said: “There’s no point in me sticking the boot in tonight because the work rate from the players was outstanding”

“Personally I am frustrated but the lads did give everything tonight and the fans responded at the end”. 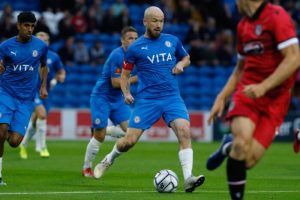 As one of the pre-season favourites for promotion, Rusk will be desperate for his players to turn these results into victories and he believes it won’t be long before they do just that:

“Don’t get me wrong we have got to turn it into three points and we’re not shying away from that, but the effort was there for everyone to see and even at times the quality”.

Resolute Defence a Base to Build On

Whilst the Hatters may have struggled in front of goal, their opponents were non-existent, with Grimsby failing to register a shot on target in the full 90-minutes.

Rusk insists that a resolute defensive set-up is crucial to building a promotion push: “It’s another clean sheet and we have to take the positives from that”. 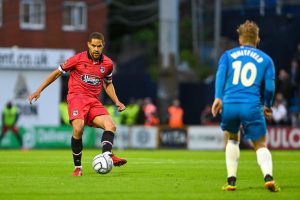 No side in the division has kept more clean sheets than County in the last 31 matches, with the Greater Manchester club notching 16 in that time period and Rusk was pleased with the control his team displayed:

“But at the same time we have to accept they (Grimsby) are the away side and the emphasis is on us to go and break them down”.

On four points after three games, County would have been hoping for better returns from the start of the 2021/22 National League season.

Sitting in 11th and five points off the top of the table, Rusk is keen for his side to start coming up with answers to tricky tests, starting with Saturday’s visit to Boreham Wood:

“It will be a tough game, but again we are away from home and every game we play we set up to win, with this one being no different”.

County return to Edgeley Park for the visit of Yeovil Town on Saturday 11th August.

What next for Stockport County as under-pressure Rusk beaten again

Trudging off the Meadow Lane pitch, Stockport County had just suffered their ...

Simon Rusk cut a frustrated figure on the Stockport County bench as ...