Benito Lowe believes he is in the right place both physically and mentally to help his New Mills side secure their ambition of promotion from the North West Counties Football League Division One South this s. 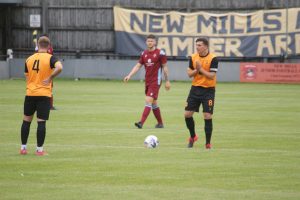 Sitting pretty in second, just one point behind leaders West Didsbury & Chorlton, with a game in hand over the Greater Manchester club, the 2021/22 campaign has so far proved fruitful for Lowe and New Mills.

Netting 10 goals in just nine matches, the midfielder has impressed as one of the division’s standout performers and Lowe insists there is more to come:

“My target for the start of the season was 10 (goals) and nine games in I’ve already hit my target. I am at a level where I’m playing well, but I know I can play a lot better and still do a lot more”. 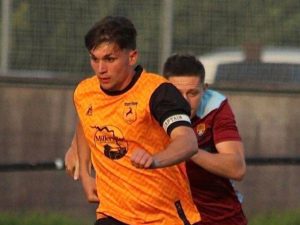 Despite currently topping the division’s goalscoring charts, Lowe did admit that the start to the season hadn't worked out the way he'd hoped:

“In the first game of the season I got sin-binned and luckily we got a late goal or else I would’ve cost us that match. I wasn’t close to where I set my levels to be”.

After a frustrating couple of weeks, it didn’t take Lowe long to find his form once again, with the former Curzon Ashton man pointing towards the New Mills management team as an important factor in ironing out his frustrations.

“They don’t stop working hard for us, they are there every week and they’re always there for us, whether that’s on or off the pitch”.

Under the stewardship of joint-managers David Birch and Mike Norton, along with Neil Jackson and Simon Heaton, Lowe has found comfort amongst familiar faces:

“I was lucky enough to have already known Birch and Norton since being a little lad, so I look up to them as good mates anyway and in a football sense I know how well they’ve done too”. 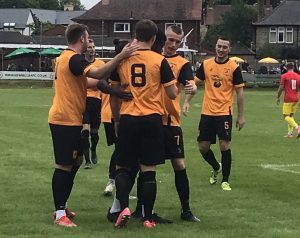 Having both shared illustrious careers across non-league, Birch and Norton understand what it takes to succeed at this level and Lowe believes experience is a crucial part of becoming a successful manager:

“Sometimes you get managers who haven’t experienced the game, but they have and that brings about a lot of respect from others”.

Unfortunately, Lowe tragically lost his father in October 2020 and has vowed to continue to make him proud with his performances:

“He would always say the only thing that would hold me back is my discipline, so I have gone into this year thinking my dad isn’t here now and I’ve made sure I approach that the right way for him”.

His dad, Gary Lowe, was a talented footballer in his own right and was part of the Crystal Place side that won the FA Youth Cup twice in 1977 and 1978.

Catching the eye of the then Manchester City manager, Malcolm Allison, Lowe moved back up north to join the Blues, before embarking on a journeyman career that stretched out as far as Hong Kong.

However, it was in management where Lowe made his biggest splash, steering Hyde United into the top-tier of non-league football after winning the Conference North in 2012. 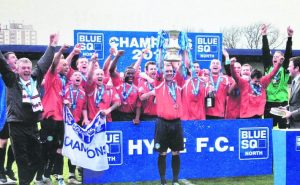 Gary left behind a larger than life legacy in the game, one which his son, Benito is keen to live up to.

All Eyes on the Promotion Prize

Even though it has been a rocky 11-months for the New Mills maestro, when asked about his expectations for the season, the answer was clear: title or nothing.

“Winning the league is our only target. We were given it at the start of preseason and that message has always been clear”. It won’t be an easy task for the Millers, who will no doubt face stiff competition from fellow high-flyers West Didsbury and Abbey Hey, yet Lowe is certain the Derbyshire club have the tools to mount a title charge:

“Last season we were probably four or five players away from competing and the managers have gone away and done what they needed to do in terms of transfers”.

Only Lowe has more goals than recent arrival Joe Bevan, whilst former Morecombe and Shrewsbury Town man, Darren McKnight has returned to the club, helping form a formidable squad.

Now with the pieces to compete, Lowe and New Mills will return to action against Armthorpe Welfare in the FA Vase this weekend, before continuing their title charge when they welcome Eccleshall to Church Lane on September 18th.

Benito Lowe believes he is in the right place both physically and ...