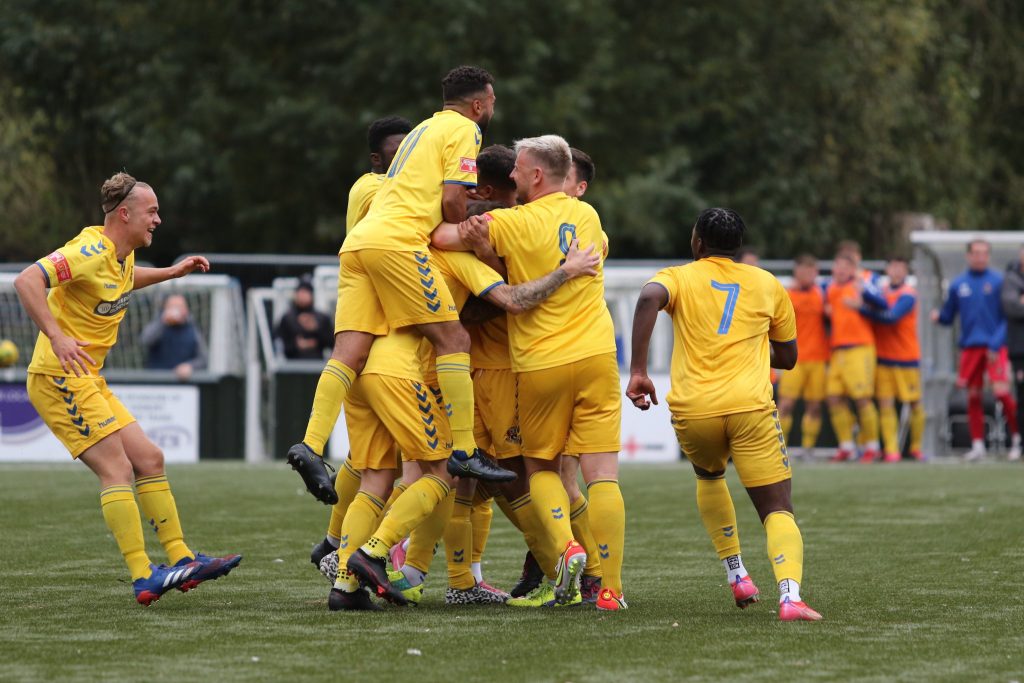 AFC Sudbury are more than ready for their big night out in the FA Cup - and joint manager Rick Andrews wants his team to savour the occasion.

The Suds back in the first round 20 years on

The Isthmian League North side are playing local opposition in Colchester United tonight at The MEL Group Stadium.

The game is being broadcast live on BBC Two as they play in the first round proper for the first time in 20 years.  The game has sold out.

Andrews and fellow joint manager Angelo Harrop only joined the club in the summer but have already equalled the club’s best ever performance in the competition.

Harrop has dealt with the increased media interest in the club in Andrews’ absence, who has been in Canada over the last week.

“I’m sure the players will be looking forward to it and the opportunity to play in front of  a 2,000+ crowd. It will be an experience for the players I hope they won’t forget for a very long time.

“I’ve just landed from Canada, but I’ve been in touch with Angelo and the boys more or less every day. This is a new experience for everyone at the club, it’s great. I have to credit the volunteers for everything that’s going on behind the scenes. It’s been pretty full on.

“We have a fully fit squad, so the players will be eager to see if they’re in the starting eleven. We have a young squad, so there’s a bit of an unknown how they will perform. It will be interesting to see how they perform against a professional club, in front of the TV cameras and a big crowd. I’m hoping that we go out and give a good account of ourselves.

“Regardless of the result, I can guarantee that they will leave nothing on the pitch,” he said.

Journey to the first round

The team have landed a plum tie - but nobody can deny they’ve had to work for it.  Entering in the preliminary round, they have won five fixtures just to reach this stage.

They duly won their first two games against the lower-ranked Cockfosters and Potton United.

The second qualifying round saw Andrews come up against his old side and divisional rivals Stowmarket Town - a game in which they needed a replay to progress.

They performed their own giant-killing act deeper into the competition - taking out Cheshunt and Dartford, who play their football one and two steps higher respectively.

The 3-1 victory over Dartford was the start of the National League South leaders current poor run of form which has seen their lead at the top slashed to one point.

“I never thought we’d get as far as we have. My luck in the cups has been pretty poor at my former clubs - I’ve normally gone out in the first couple of rounds! We had a kind draw in the first rounds playing lower league opposition.
“We’ve worked hard for it.  I’m very proud of the players and coaching team. It’s a real team effort, they’ve been superb. We’re all pulling in the same direction which makes the job far more enjoyable.

“The crowd could have a huge impact on the Colchester game. When you’re running down the wing and someone shouts your name it puts an extra 10% into your stride,” he said.

Progress under the new management duo has been swift at Brundon Lane, with the team also riding high in the league with just one defeat so far this season.

The team’s cup run has caught the imagination of the local community, with pubs making bespoke cocktails for the occasion and good luck signs being posted around the town.

The AFC faithful have also praised the pair for adding a steeliness to their side’s play which has been missing in previous seasons. They have the stingiest defence in the league, letting in only six goals so far.


“We’ve got a good all round squad that have done well so far this season.  It’s been a lot of hard work, but the boys are buying into how we run things. We’ve got an exceptional group of young players who are prepared to listen and learn.  They work extremely hard for each other.  Supporters are telling us in previous years that the club played some nice football but perhaps had a soft underbelly.

“We inherited a squad and gave everyone an opportunity, while adding players to strengthen. It’s often said in football that if you sort out the back line and don’t concede you will pick points up somewhere along the line. We’ve done that, and so far it’s gone well for us.

“I hope everybody in Sudbury enjoys the occasion.  The magnitude of what we’ve achieved so far is starting to hit home a bit now.  It’s massive financially for any club of our level to go on a run like this.  The last two seasons have hurt a lot of clubs badly. The nice thing from our perspective, is that we never budget for cup runs. This is the cream on the cake. If it allows the club to make themselves stronger, what a fantastic achievement that is,” he said.