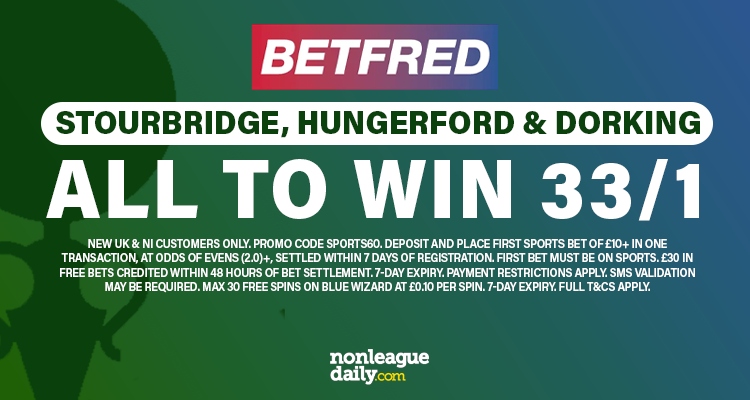 The FA Trophy returns this weekend, with National League sides entering at the third round stage. We've brought you our match preview and betting odds from the best bookmakers UK.

Chesterfield and Maidenhead United have both withdrawn following Covid-19 outbreaks at both clubs, handing byes to Guiseley and Maidstone United respectively.

Ties must be decided on the day and games level at 90 minutes will go straight to penalty kicks.

There are a number of all-Step 1 clashes, but cup football is built on the lower ranked sides getting opportunities against the bigger sides. Read on for some of the weekend’s key matches, and odds courtesy of STSBet.

Solihull Moors will travel to AFC Fylde on the back of a four game unbeaten streak in which they have not conceded a goal.

Neal Ardley’s side are well in the promotion picture this season, and will match their best Trophy performance should they progress to the next round.

The Coasters will not be easy opposition even though they have lost the lead of National League North in recent weeks.

The Mill Farm club are unbeaten at home this season and boast one of the division’s top scorers in Nick Haughton. He’s scored 12 goals in 17 games.

Recent defeats at Darlington and Curzon Ashton have shown they are beatable, but Jim Bentley’s side do have form in this competition - having won it in 2019.

This tie looks like a real banana skin for Weymouth, who have lost five on the bounce in the National League and are only outside the relegation places on goal difference.

Brian Stock’s side are shipping an average of two goals per game this season, and have scored just 21 times in 19 games.

Twice quarter finalists in this competition, Weymouth will have to improve on their record to date this season to keep their dreams alive.

Hungerford beat National League South rivals Welling United to reach this stage and are in contention for the playoffs.

The Bulpit Lane side have matched their best performance in the competition by reaching the third round and will look to use home advantage to oust The Terras.

Hungerford are in inconsistent form, winning three and losing three of their last six matches.

Ryan Seager’s goals have been critical for Hungerford so far this season, with the striker hitting 13 in 16 league games.

Tommy Widdrington will look to avoid an early upset in his reign at King’s Lynn as they face NPL Premier side Nantwich Town.

Widdrington won his first game in charge of The Linnets, beating Dover Athletic 2-1 before a midweek defeat at FC Halifax brought them back down to earth.

King’s Lynn were knocked out in the fourth round last season by eventual winners Hornchurch.

Nantwich are second bottom of their league, and without a win since beating FC United of Manchester in early October.

The Dabbers have found their form in the Trophy however, winning three games to reach this stage.  They had a memorable run to the semi finals in 2016, eventually losing to Halifax over two legs.

The Marketmen welcome a Wealdstone side to Bloomfields on a downward trend, having lost three games back-to-back.

Kevin Horlock’s side are making history this season with the club never having come this far in the competition.

Wealdstone made the fifth round last season before being knocked out by Step 2 side Darlington. They won the competition back in 1985.

While it’s unlikely to be their last - barring a second-half of the season miracle - The Shrimpers could have had easier ties than Dorking.

Marc White’s side handed NLS leaders Oxford City a first defeat in eleven games in midweek and climbed back into playoff contention.  This was only the club’s second away win of the season in nine attempts.

Southend have at least climbed out of the relegation places, albeit only on goal difference.  A promising win over Altrincham may have been the highlight in recent weeks, but they were soon brought back down to earth with a 4-1 loss at Notts County last weekend.

Will you be building an FA Trophy acca this weekend? Let us know on social media. You can also check out the best in play betting strategies with us today!