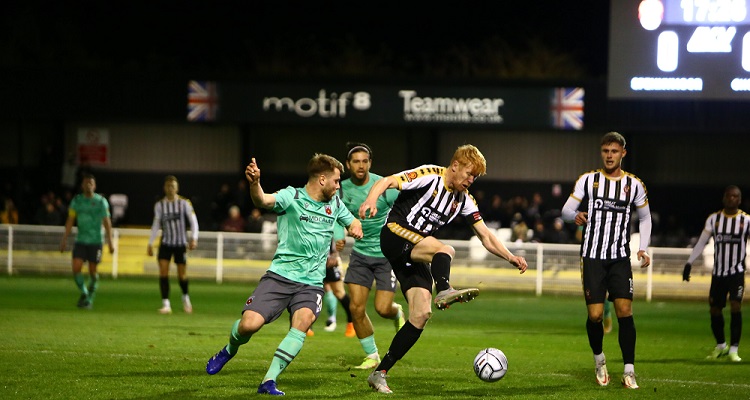 Marine came closest to springing a surprise as the FA Trophy second round came to a midweek conclusion.

Eight fixtures had to be rescheduled in the aftermath of Storm Arwen, with stadiums damaged, pitches frozen and teams unable to travel to games.

Read on for your full roundup of both nights’ action.

The National League North side scraped through to the third round on a penalty shootout against Step 4 opposition in Marine.

Marine had taken the lead through Neil Kengni, but found themselves trailing at the break thanks to quickfire goals from Brad Dockerty’s penalty and Oli Johnson’s first of the night.

Ryan Wignall levelled the game before Johnson hit a second.  The game looked to be finished until Ben Hughes equalised in the last minute.

Mark Bower’s side held their nerve in the penalty shootout to secure a third round clash with FC Halifax Town.

The NPL West side had won their three previous round games on a penalty shootout, but their luck ran out in West Yorkshire despite a valiant display.

Ten-man Guiseley survived being a man down for the last 20 minutes as they progressed at Hurst Cross.

The home side had taken the lead just five minutes into the game through Florian Yosnian, but Jordan Thewlis had equalised within ten minutes.

Jamie Spencer netted the winner midway through the second half, before Thewlis received his marching orders four minutes later.

Guiseley have booked a trip to Chesterfield in the next round.

Tom Allan’s goal from Luke Parkin’s corner was enough to send Farsley through to the next round.

It’s the end of the line for NPL Premier side Stalybridge, who had knocked out Yorkshire Amateur and Bootle to reach this stage.

Two all-National League North clashes had to be settled by spotkicks.

Southport’s game with Darlington ended 1-1, with the home side progressing after winning the shootout 5-4.

Spennymoor Town’s match with Chorley ended goalless, with the home side winning through 3-1 on penalties.

Southport will travel to Farsley in the next round, with Spennymoor on the road to Radcliffe.

Two of Step 4’s best teams this season to date both exited the competition on Tuesday night.

NPL East front runners Marske United and Liversedge have both made waves in the Trophy this year. Marske have made it to this stage two years in a row, with Liversedge enjoying a great debut campaign.

Lancaster City proved too strong for Liversedge, picking up a 3-1 win.  Marske were also eliminated after a 3-2 defeat at Matlock Town.

Lancaster face another trip across the country to take on Morpeth Town in the next round.  Matlock will host Step 2 York City.

Elsewhere, Nantwich Town set up a trip to King’s Lynn Town with a 1-0 victory at Whitby Town thanks to Daniel Cockerline.  The home side finished the game with nine men after both Nathan Dyer and Marcus Giles were sent off late on.

Ashington AFC chairman Brian Shotton has called on the FA and Premier ...

AFC Totton sprung the biggest surprise of the day after demolishing Concord ...