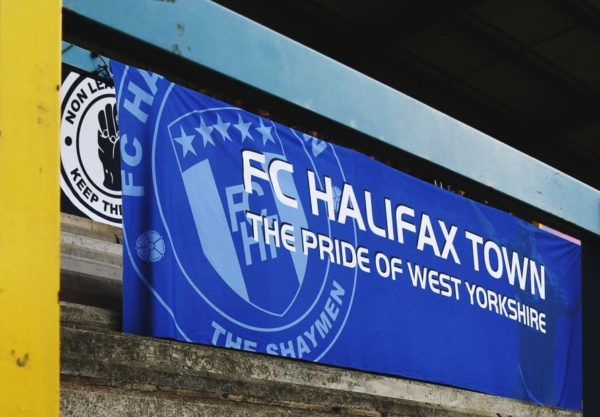 FC Halifax Town are into the final 32 of the FA Trophy - after beating Bradford Park Avenue on penalties in a dramatic game at the Horsfall Stadium.

The Step 2 side gave National League promotion chasers Halifax a big scare, taking the lead three times in a game that ended 3-3 at full time.

Billy Waters scored the decisive spotkick as Halifax held their nerve to net all five penalties and avoid an upset against their near neighbours.

Bradford push rivals all the way

Mark Bower’s Bradford side may not be in great form, but were in front within the first five minutes thanks to Brad Dockerty. The lead didn’t last ten minutes, setting the theme for the night, with Jack Vale levelling the score.

Isaac Marriott’s goal gave Bradford the half-time lead, but Luke Summerfield brought the visitors back into the game on the hour.

Bower proud of his side’s efforts

Speaking to the club’s media, Bradford Park Avenue boss Bower said: “I’m proud of my players. We’ve obviously come up against a good side and it’s no accident they’re around the top of the National League.

“We got in front early on, and then we struggled a little bit to contain them. They pulled us apart really well and showed what a good side they are in possession. It was only a matter of time before they equalised.

“After that, we reacted well and got back in front.  I just wanted the lads to play with a bit more confidence on the ball in the second half. Although we spent the majority of the second half without the ball, we actually caused them a few problems.

“When you score in injury time you think you’ve won it, but we’ve given a poor free kick away and not done our jobs in the box to pick up the lad who equalised.

“The players’ efforts were outstanding. Obviously it hurts, being so close to getting through but we’ve got to take what we’ve shown into Christmas.”

Shaymen march on to meet Alfreton

This game was originally scheduled for last Saturday, but was postponed due to heavy fog.

Pete Wild’s Shaymen have taken their place in the fourth round, where they will travel to National League North side Alfreton Town. Alfreton were 3-1 winners at Curzon Ashton in the previous round.

Halifax are now without a Boxing Day fixture after opponents Grimsby Town have seen an increased Covid outbreak within their squad.

Bradford’s festive game against York City is still on at the time of writing.

Soul behind the goals - Home at the Avenue for Oli Johnson

He featured as high as the Championship, has been the match-winner in ...