After the drama from the FA Cup First Round Qualifying last weekend, there was more domestic cup action this week, with FA Vase matches for teams in steps five and six of the non-league pyramid. 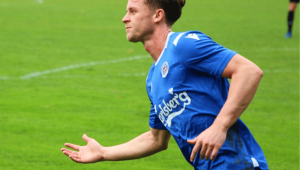 There may have been no cricket between England and India in Greater Manchester this weekend, yet Wythenshawe Town didn’t need an invitation to hit Litherland REMYCA for six, as the North West Counties Football League Premier side progressed in style.

Matthew Bryan was the pick of the performers for Town, with the Wythenshawe man striking four either side of the break to fire them through.

Deane Smalley had opened the scoring for James Kinsey’s team, whilst a further goal was added by Brad Byrne late on.

Aidan Chippendale was on target twice for Bury AFC as they saw off Northwich Victoria of the NWCFL Premier in an entertaining 2-1 victory away at Wincham Park.

The Bury man netted either side of half-time to secure progression for the NWCFL First Division North side, who will now be eager to build a lengthy cup run.

Ryan Winder had put Northwich in front after 24 minutes, yet the hosts were unable to build on their lead and ultimately find themselves knocked out by lower opposition.

Kyle Foley was the standout performer for Cheadle Heath Nomads as they romped to a 4-0 win against St Helens Town.

Leading 3-0 at the break, Foley struck twice inside half an hour to put the Greater Manchester side ahead, whilst Daniel McLaughlin added a third before the break.

Kieran Alley scored Nomads’ fourth of the evening, securing an impressive away victory for Jake Davies side.

Millers March on After Penalty Pressure

Dylan Forth was the hero for New Mills as they march on to the FA Vase Second Qualifying Round with a penalty shootout victory against Armthorpe Welfare.

Joe Bevan netted once again for the Millers early on, but the home side was quickly pegged back through Matthew Hughes’ strike.

However, it wasn’t to be for Armthorpe of the Northern Counties East League Division One, who were denied a victory in Derbyshire through Forth, saving twice in the shootout to secure the win.

James Cottee scored the eventual winner for West Didsbury & Chorlton as they progressed past Nostell Miners Welfare with a slender 3-2 victory.

Dontai Gabidon had struck twice early on for West, to put them in a seemingly unassailable position, yet a defensive error allowed Nostell to snatch one back before the interval.

Luis Penney Larter was on hand to equalise for the visitors from West Yorkshire, but Cottee’s strike midway through the second period proved too much for Nostell who are knocked out after the first hurdle.

Elsewhere From First Round Qualifying

In their maiden appearance in the competition, Macclesfield were sent packing at the first time of asking with a 3-2 defeat away to Winterton Rangers. Despite leading the way in the NWCFL Premier, the Silkmen are now out of both national domestic cups and will turn their attention to earning promotion.

Irlam were winners in their clash against fellow Greater Manchester club Cheadle Town, with Liam Pollitt’s first-half strike the difference between the two sides.