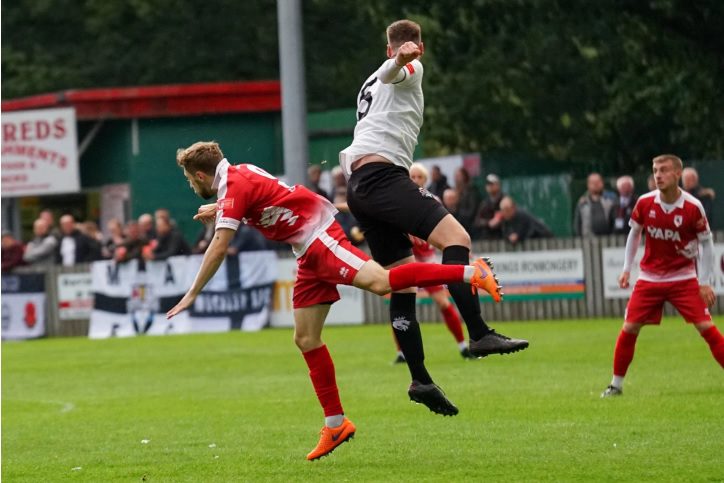 Two from two for Mossley

Mossley are among the early leaders after picking up a second consecutive victory last night.

David Fish’s side beat Colne 1-0 and have six points on the board after beating Bootle 2-1 on the opening day.

The game looked to be heading for a goalless draw, but Antony Taylor had other ideas and bagged the only goal of the night in the 90th minute.

Trafford fight back for another draw

Trafford are still unbeaten, but also yet to taste victory after drawing 2-2 against Leek Town.

The game, played at Buxton’s Silverlands ground as Leek are having an artificial pitch installed, had looked well in favour of the ‘home’ side at half time with Daniel Trickett-Smith scoring twice in the opening 20 minutes to give Leek a solid lead, but Matty Morgan got his side back in it three minutes before the break.

Danny Caldecott’s side drew level through an own goal for Leek’s Will Reeves midway through the second half, and pushed on in search of a winner that never arrived.

They avoided injury-time heartache as Adam Rooney cleared a shot off the line.

Ramsbottom United fell to a 0-3 home defeat to Marine and have yet to score this season. Ben Hughes, Neil Kengni Kuemo and Niall Cummins all hit the back of the net for the visitors, who are top of the table at this early stage.

NPL West teams join the FA Cup this weekend at the preliminary round stage.

Ramsbottom United will look to grab a first win of the season away at North West Counties Premier side Barnoldswick Town, who thrashed Runcorn Town 6-1 at the first stage.

It’s a case of history repeating itself for Trafford, who line up against Colne just a week after playing them on the opening day of the season.

Mossley travel to Liverpool to take on Lower Breck of the NWC Premier Division, who came through a replay to beat Penistone Church 2-1 after the original tie ended goalless.