Hatters83 | The group from Stockport reinventing supporter culture in non-league

Meet the fan group from Stockport bringing a touch of ultra-culture to the English non-league scene. 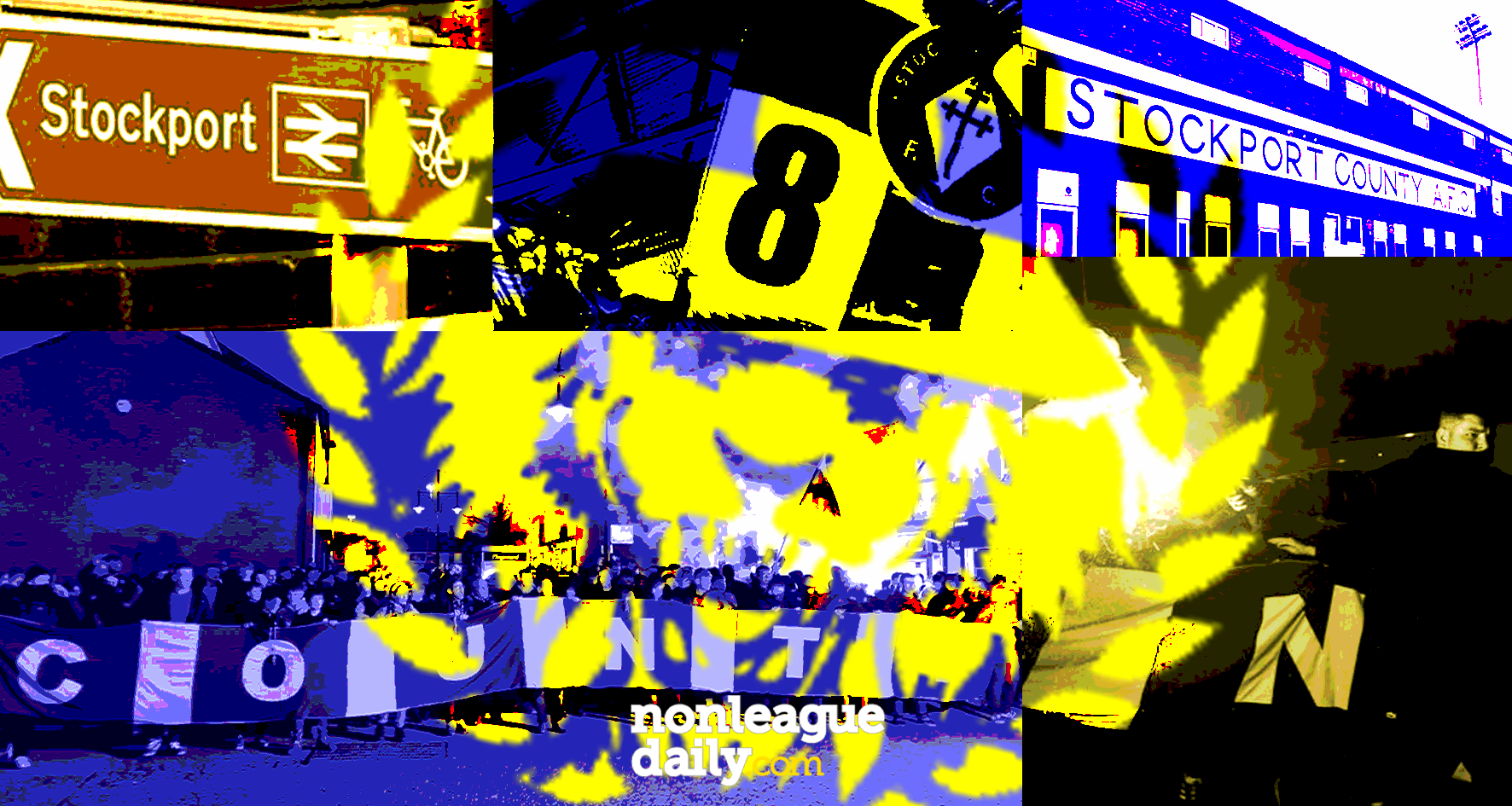 Stockport County’s social media team couldn’t have captured the mood more succinctly than with the words, “Bedlam at Edgeley Park.”

This was the tweet that followed Paddy Madden’s last-minute winner at home to Solihull to secure a scrappy 1-0 victory and a vital three points to maintain their seven-point lead at the top of the National League.

However, bedlam in and around Edgeley Park is not a new phenomenon, thanks in no small part to Stockport’s dedicated followers of County, Hatters83.

The group, whose name combines Stockport County’s famous nickname with the year of the club’s formation, have been the driving force behind the raucous atmospheres that have followed County up and down the country.

Officially formed in 2018, Hatters83 endured a turbulent start to life on the terraces. That was, until this season when they made themselves and the rest of the Edgeley Park faithful impossible to ignore.

Harry Bruckshaw, instrumental in the Hatters83 setup, told NonLeagueDaily: “Hatters83 was created specifically to improve our atmosphere at both home and away games, to help give our players a lift during games, as our team always thrives when the fans make noise.”

The results on the pitch mirror his theory.

Stockport County manager Dave Challinor recognises how much impact the atmosphere, created by the likes of Hatters83, can have on the result of a game.

Since Challinor took charge in November 2021, Stockport County have won 21 National League games, losing just three in that time and now sit on the brink of a Football League return.

Challinor has never intended to take all the credit himself, in an interview on Stockport County’s YouTube channel after his first game in charge of the club, he said of the fans: “The noise they made is massive for the players. We know that we get that support at home in terms of numbers, we have to use that to our advantage."

A constant noise throughout County matches, it's the actions away from the terraces that have helped Hatters83 garner the most attention, with fan marches an instant success with the Stockport fans.

Anyone in the vicinity of Castle Street - Edgeley's main shopping high-street - could've been forgiven for thinking they’d stepped into the pre-match build-up to a top-flight European fixture, instead of a non-league match.

The march itself consisted of hundreds of County fans, led by Harry Bruckshaw, parading a street-wide County banner down Castle Street in a plume of blue smoke.

There was barely a pause for breath between the chants, which could have been heard streets away. As the march reached its end, there was just enough time to begin letting off fireworks in the middle of the street. Complete and utter brilliant chaos.

It cannot be doubted that nights like that have played an enormous role in turning Edgeley Park into the fortress that it has become in the second half of this season.

That role is not one that has gone over the player's heads, with striker Scott Quigley reacting to the scenes outside the ground with a new nickname, “Edge-stanbul.”

The group have also caught the attention of Stockport County manager Dave Challinor, being invited on to the pitch after the game against Solihull to unveil a custom-made flag carrying his face and a historic Stockport County badge. On the subsequent photo, Challinor looks delighted with the work.

Hatters83’s Harry told NonLeagueDaily: “The reaction has been wonderful from everyone in all honesty, the club and County fans have donated to us to help with new ventures. We are all grateful to everyone who has helped us and continue to do so.”

Harry refers here to the GoFundMe page that was set up by Hatters83 so that fans could contribute to future marches and events.

The support was strong, made all the sweeter with a surprise £300 donation from the Stockport County first-team players and staff.

A massive Cheers, thank you to everybody that purchased a sticker pack today. Sold everything that we came with.

There will be more available down in Yeovil and at the Cheshire Senior Cup final so make sure to get yourselves down for that!

The impressive amount raised via the GoFundMe page will be going towards future marches and similar events, for the necessary equipment to create such a spectacle.

Harry said: “The next fan march will be for Torquay at home, which will hopefully be our last ever mid-week game in non-league!”

County fans will be hoping that the league is all but wrapped by this point, but anyone with experience of non-league will be aware that anything can happen.

This was epitomised in the weekend following the Solihull result. Stockport, Wrexham and Halifax, all sitting in the top three, suffered defeats to teams that on paper they would normally be expected to win.

It is expected that the Torquay march will be in a similar vein to the ones before the Chesterfield and Notts County games. However, Harry hints that something even more spectacular is planned for the final game of the season, at home to Halifax, on a day which County fans will be hoping is a celebration as they move into the Football League

He said: “We have something much bigger planned for the Halifax game, look out for announcements on that very soon!”

Just what the group could be planning that would surpass what has gone before remains to be seen, but the group's track record tells you that it’s likely to be a day to remember for those County fans involved.

Any announcements about future marches and events can be found on the dedicated @Hatters83 Twitter account, along with regular updates from the group.

The atmosphere created and supported by the group has undoubtedly been a huge factor in Stockport County’s success so far this season, but it won’t end there.

Stockport County owner Mark Stott, who met the group for the first time recently after the Solihull fixture, has his sights set on Championship in the long term.

If Stott’s dream is to be realised, support from the stands will be vital throughout the quest. With groups like Hatters83 driving the atmosphere and culture around the club forward, it may make the task that little bit easier.

It seems the group are more than ready for that task, as Harry tells us: “Hatters83 have only just begun!”

Simon Rusk cut a frustrated figure on the Stockport County bench as ...