Frank Jones urges his fellow FC Isle of Man teammates to push on and challenge for glory in their first season as a North West Counties First Division South club. 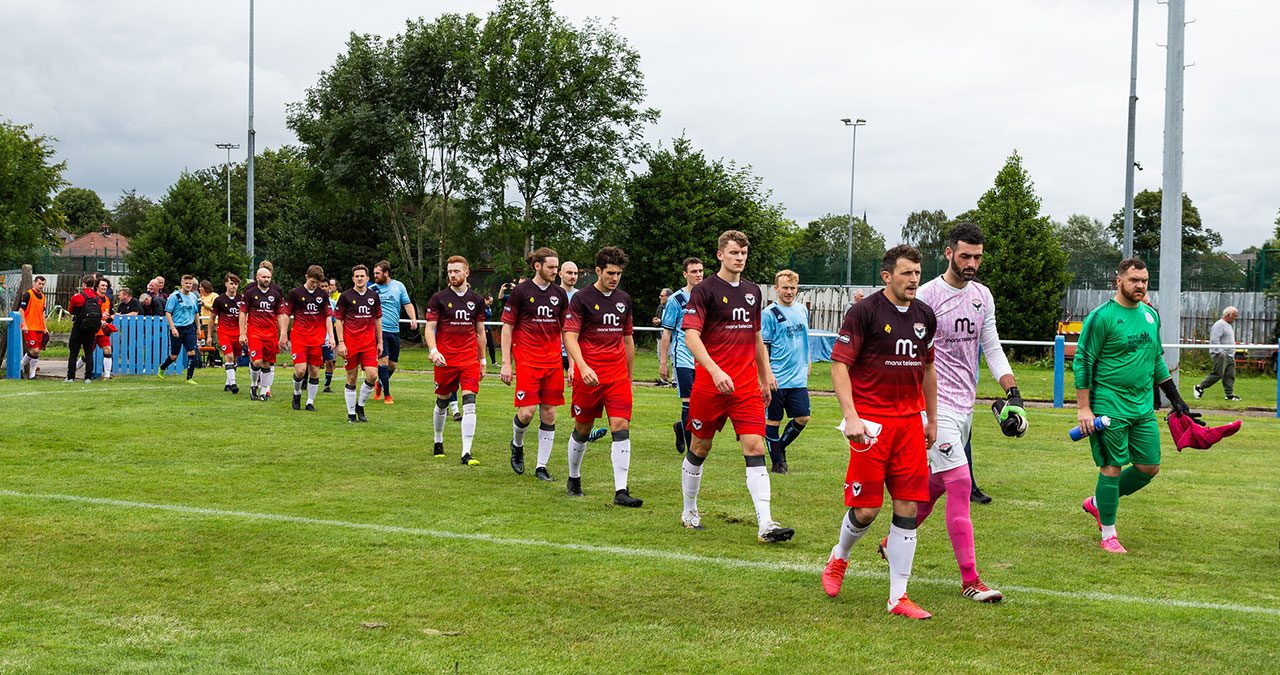 First step out of isolation for the Ravens

Isolation is something we have all had to contend with over the last 18-months, yet for those from the Isle of Man living a life of seclusion was the norm way before the pandemic hit.

Sitting in the Irish sea, the island inhabits roughly 84,000 people and is renowned for its sporting pedigree. Home to the Isle of Man TT motorcycle race since 1907 and the birthplace of joint record Tour De France stage winner, Mark Cavendish, sport and the island go hand-in-hand.

But despite their illustrious sporting past, the Isle of Man has never grabbed headlines because of its football…until now.

Netting after just eight minutes, FC Isle of Man captain, Frank Jones made history by becoming the first-ever goal scorer for the club in the English football pyramid. Forced off through injury just ten minutes later, it was a day of mixed emotions for the 33-year-old.

Speaking after his return to the island, Jones admitted: “It felt like a bit of a defeat on the way back because we really wanted to win and make it such a big occasion.”

Jamie Roe’s equaliser for Maine Road FC just before halftime denied FC Isle of Man a famous victory, but Jones is confident his teammates will bounce back stronger.

“A big thing we learned from Saturday is you have to be switched on all the time in this division. The league is so competitive there is hardly anything between the teams at the top and the teams at the bottom.”

Ravens not here to make up the numbers

Whilst they may be the league’s new boys, Jones insisted that his fellow FC Isle of Man players are keen to compete.

“We want to win every game and that’s what we’ll set out to do. We have quite a young squad so the management is just trying to make sure as a team we’re in the right place and ready to play anyone.”

Jones is one of just six players from a registered squad of 33 over the age of 30 and the club captain’s experience has been crucial for the Ravens as they transition to the English pyramid.

“When we turn up to play against teams from the Isle of Man on a Saturday, we know exactly who we are playing against and what to expect, but that has just completely gone out of the window.

“Not knowing what to expect from teams means we’ll be going into matches blind at times, but it’s important we use that to our advantage where we can.”

Putting in the miles on and off the pitch

Alarm set for 5.30 am ready for a 6.30 am boat trip from Douglas Sea Terminal, Jones and the rest of the FC Isle of Man entourage were up bright and early for their maiden voyage across the waves.

Returning home at 10.30 pm that same night, ensuring the squad is able to manage the travel will be key to the Ravens’ success this season, believes Jones: “Even though it isn’t a million miles away, it still is a long day for us travelling there and back.”

The average ferry trip between the island and Liverpool comes in at just under three hours one way, but Jones has ruled out using the travel as an excuse.

“Even though it is only across the water which isn’t too far, it can add up in the end, but one thing is for sure, we won’t use it as an excuse.”

Ravens reliant on form away from home

With stringent measures still in place regarding who can and cannot enter the island, the club have been forced to play all their opening fixtures away from home, with no set date on when teams can travel to the Isle of Man.

“There are rumours that it may be at the end of September or start of October, so hopefully it isn’t too far away.”

When it was announced the Manx club would be competing in the NWCFL Division One South, excitement on the island was high. But, without any clarity on when their first competitive home match might be, the anticipation has had to be put on hold.

However, supporters from the Isle of Man have been able to taste the side in action before, with the Ravens facing off against fellow island club, Guernsey FC, in a two-legged showpiece fixture last summer.

“If I go back 12 months ago when we played them (Guernsey) in a cup match, the national stadium was sold out with thousands of people there.”

Jones went on to joke about his increased notoriety ahead of the last year’s match: “After it was announced as a sell-out, so many people were calling me asking for tickets, but I was like ‘I’m not really used to this’ you know?”

Confident that the enthusiasm will return when the Ravens are able to welcome sides into their 3,000 capacity stadium, the Bowl, Jones believes it is up to the players to draw supporters through the turnstiles.

“I know what the locals are like and once we start playing at home there will be people coming down and if it is an exciting game, they’ll want to come back next week.”

Build a legacy and be remembered as a hero

Sport on the island was thrown back into the spotlight this summer when former Olympian, Cavendish returned to the Tour de France to equal the record number of stage wins set by the legendary rider, Eddy Merckx.

A cult hero across the island, Cavendish’s influence on the Isle of Man continues to prove invaluable, with Jones challenging his teammates to ensure the football team makes a similar impact.

“I have played for a number of years and I plan on continuing to do so for many more, but what we’re doing with this club isn’t just for now, it is for the next generation.

“Having those opportunities to play in the English pyramid can only be a good thing for the island.”

History makers already, the legacy this group of FC Isle of Man players build won’t be based on their results on the pitch. Instead, their pioneering efforts will be remembered for providing a platform for a generation of footballers to follow in their footsteps.

The Ravens continue their search for a first-ever victory in the NWCFL First Division South with a trip to face Wythenshawe Amateurs at Hollyhedge Park on Saturday 7th August.

On the eve of their biggest home match of all time, Amos ...