Hyde United manager Dave McGurk has resigned from his position for personal and family reasons. 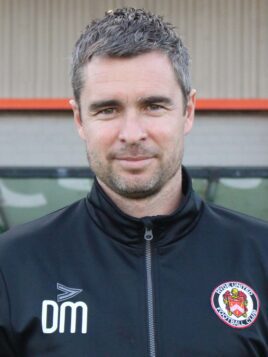 The 38-year-old has been in charge since 2019 after initially joining the club three years earlier as assistant manager to Darren Kelly.

Search for a New Manager is On

The Northern Premier League Premier Division club have now opened the search for a new manager.

In a statement to the club website, he said: “It’s been an emotional couple of days as I’ve said my goodbyes to staff, players and directors. I feel it’s time to hand over the role as manager to someone else and I decided this before the game on Saturday at Matlock.  It’s a decision I needed to make for myself and my family.

“Being manager of a part time club is a very hard job. I’ve loved every minute but the last few months have proved really difficult to get a work/life/family balance. I simply can’t put the time or energy into the job to meet the demands that I expect of myself as a manager. I plan to take a couple of months with my family to recharge and I’ll come back into football with a new challenge at some point.

“As assistant manager with Daz we created some great memories with promotion and the FA Cup run. I never got to complete a season as manager with Covid hitting but what the players did in my first year was incredible with the budget we had. We were gutted when it ended as we were flying in the league and had the two semi finals still to play. There’s a great group of lads there now and I’m sure the first win will come this week and there will be many more from there.

“There are too many individual people to thank, I hope they all know who they are. In particular though my staff have been everything I could wish for in terms of their roles and support. The directors and volunteers, what you do at this football club to keep it running is amazing. The fans….. as a first time manager I needed your support from the off and I got it. Thank you.

“It’s been a brilliant 5 years of my life and I now wish Hyde and everyone associated with the club the very best of luck going forward. I’ve made a lot of friends there and I’ll be down as soon as I get the opportunity.”

The board have accepted his resignation “with great regret, thank him for his hard work over the last five years and wish him well for the future.”

The Tigers have had a difficult start to the new season, losing all three of their games so far.

Assistant manager John McCombe will take charge of the team in the interim starting with Tuesday night’s home game against Grantham Town.

The club will accept applications for the vacant post via the club secretary until Thursday August 26.