James Rowe admits he is delighted with the way Chesterfield have started their 2021/22 National League campaign, but has warned his squad against letting complacency set in. 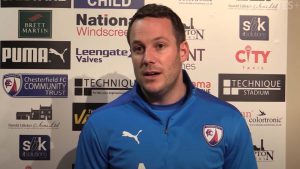 Rowe-ing the boat towards Chesterfield glory

Just under a year since he was drafted in to take over an under-performing Chesterfield, James Rowe has transformed the fortunes of the Derbyshire club.

Currently second in the National League, one point behind leaders Grimsby, Rowe has taken charge of 50 Spireites matches, losing just 10.

One of those losses being September’s 3-1 defeat away to Woking, which after 13 games of the season remains the only time Chesterfield have been beaten so far.

An ambitious manager, Rowe approaches the game with a philosophical outlook and he believes his previous experiences have allowed him to flourish at the club:

“When I joined as an assistant at Aldershot Town in 2016/17 we had one player signed…I got to shadow Garry Waddock who has won this league and had plenty of promotions since.

“I’d point to my learning there with Gary and also when I was doing it on my own at Gloucester City, where we had to oversee a switch from part-time to full-time and into a new stadium.”

Whilst he might not boast a CV littered with previous jobs in management, Rowe has not been afraid to make the big decisions since arriving at the Technique Stadium.

Supporters were left frustrated with some outgoings at the start of the campaign, yet Rowe was keen to shed light on the clear recruitment policy the club operates with:

“If we’re paying fees for players, we want them to be the right age and in the development bracket where we can get more out of them.

“We want to push players on ideally with us, or if that’s not with us, then they’ve got a market value where we can move them on to the upper echelons of the pyramid”.

When quizzed on the type of players he most enjoyed working with, Rowe was clear with his answer:

“If it’s the players or the staff, I want people that want to be around the club. You’re the master of your own destiny and you can be whatever you want to be if you work hard at it”.

One player Rowe has been public in his admiration for is National League top scorer, Kabongo Tshimanga, who arrived from Boreham Wood in the summer.

Part of the recruitment strategy Rowe places so much emphasis on, Tshimanga was brought into the club to provide goals and the 24-year-old has done just that, netting 11 times in the opening 13 matches.

Whilst prolific in front of goal, it has been Tshimanga’s willingness to learn that has caught the eye of Rowe the most:

“When I was first given permission to speak to Kabongo from Boreham Wood, it was the way he wanted to develop himself further that impressed me.

“I’ve watched him for about three years and his mindset around wanting to learn every day is a good fit for the environment we’re building here with myself and the staff”.

One step at a time in Rowe’s road to success

There are few sides in the division in better form than Chesterfield right bow, but Rowe is aware of how quickly things can change in the National League:

“There is an instant gratification throughout society where everyone demands success straight away and you can be a king one moment, but you lose a game and it’s all gone.

“The feedback to the players on a daily basis is we only focus on the next opponent. We obviously have weekly targets in-house, but it’s about firmly keeping our feet on the ground”.

As Chesterfield continue their push for promotion back to the Football League, the impact Rowe and his backroom staff have made is clear to see throughout the club.

While sense of ‘meaning’ can be crudely exploited by some in football, ...