Curzon Ashton and Altrincham couldn’t be separated at The Tameside Stadium as both sides continued their preparations for the new season. 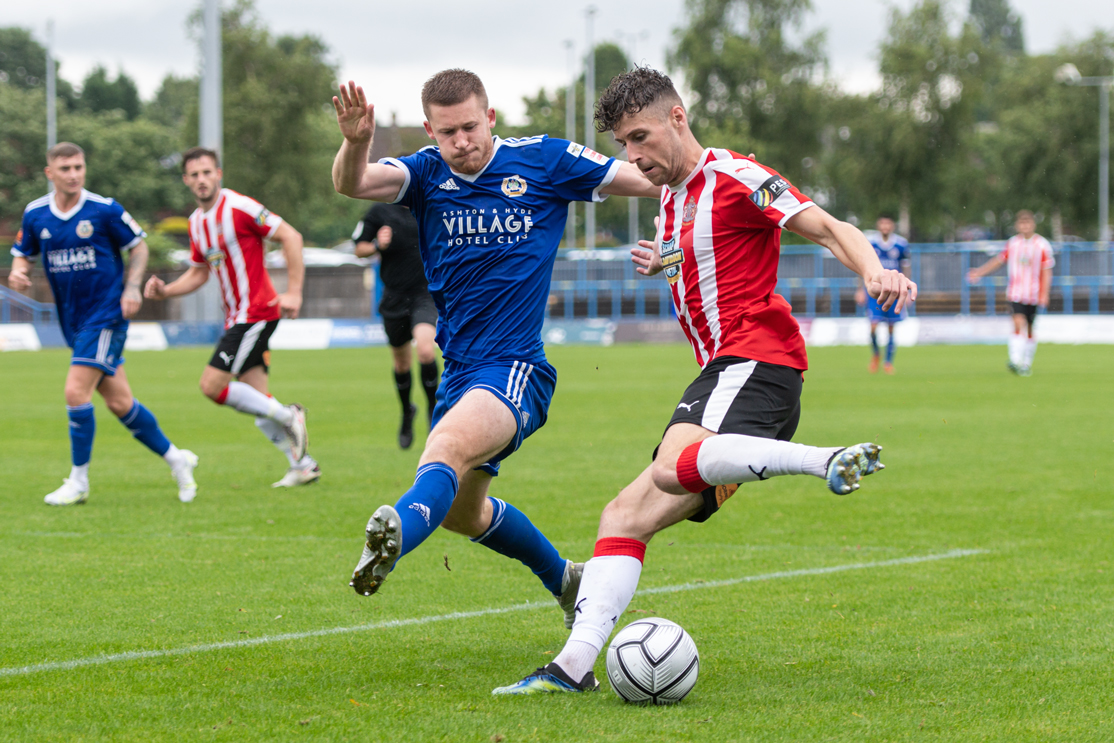 Alex Curran opened the scoring for the National League North on 35 minutes, after the away defence had initially cleared Jack Dunn’s free kick.

His deflected shot tucked into the corner of Tony Thompson’s goal, giving Curzon the lead at the break.

Substitute Tom Peers levelled the game just after the hour, stabbing the ball into the net from close range.

Bright start but no end product for Altrincham

The game started in wet conditions, but the rain eased as the game progressed and the well-maintained pitch’s slick surface prevented the game becoming a mud bath.

It was the visitors who started brighter after making the short trip across south Manchester, with new signings Ben Pringle and Marcus Dinanga at the centre of much of the early play.

Altrincham remained on top for the first 20 minutes, without taking real advantage of their extra possession and some neat play in the early stages.

Dinanga was once again the target for a pinpoint Ryan Colclough pass into the box, but missed the chance to test Renshaw and the ball went out for a goal kick.

Curzon grow into the game and open the scoring

Curzon got into the game as the half progressed, and by the time Curran broke the deadlock the home side were well on top.

Two corners in quick succession led to Thompson being brought into the game for the first time, keeping Dale Whitham’s header out from a Luke Daly free kick.

Curran increasingly caused problems for The Robins’ back line, although a chance to double his tally ended with the 22-year old being offside, after Dominic Knowles and Matty Waters combined well to set him up.

There was an early setback for Curzon manager Steve Cunningham early in the second half, as a groin injury to Jack McKay forced him to substitute the new signing.

Knowles had a good chance to seal the game for Curzon on the hour, but his low shot rebounded off the post.

Peers’ equaliser came as Altrincham essentially passed the ball into the net, with Curtis Miller getting the assist from within the penalty box.

The game became disjointed as both sides made a number of substitutions, but both sides weren’t content to settle for the draw.  The home side adjusted better to the changes and finished the game on top.  Striker Craig Hobson was the standout, putting in a lively performance - and almost won it with an acrobatic volley near the end.

Curzon manager Cunningham said: “I thought we were fantastic today, and am disappointed with the draw. For large spells of the game we were very good, and had opportunities to score more goals.  I’m a little disappointed that the only time we dropped off in concentration, they scored a well worked team goal. We’d stopped the way they play for the majority of the game. For the first ten minutes or so we didn’t know what to do - not knowing when to press, giving away cheap balls - it was frustrating. After that we really started to press and deliver what we’ve worked on in training, and that intensity allowed us to get on the ball and be brave.

“Altrincham are in the league above us and we matched them in intensity levels and energy, that confirms that we’re ready for next week. We’ve had to be at the races today against a team that are better than Chester in theory because of the league they’re in.

“Jack McKay tweaked his groin in the warmup, he struggled in the first half but we wanted to see if he could break through the pain barrier. We had to take him off as he’s going to be a big player for us this year.”

Curzon begin their season on Saturday away at Chester, while Altrincham are in action on Tuesday night away at Trafford as they continue to prepare for the new National League season.

Curzon Ashton and Altrincham couldn’t be separated at The Tameside Stadium as ...