Ten-man FC United rallied in the second half, but couldn’t rescue a point as Hyde United won 2-1 in a bad-tempered clash at Ewen Fields. 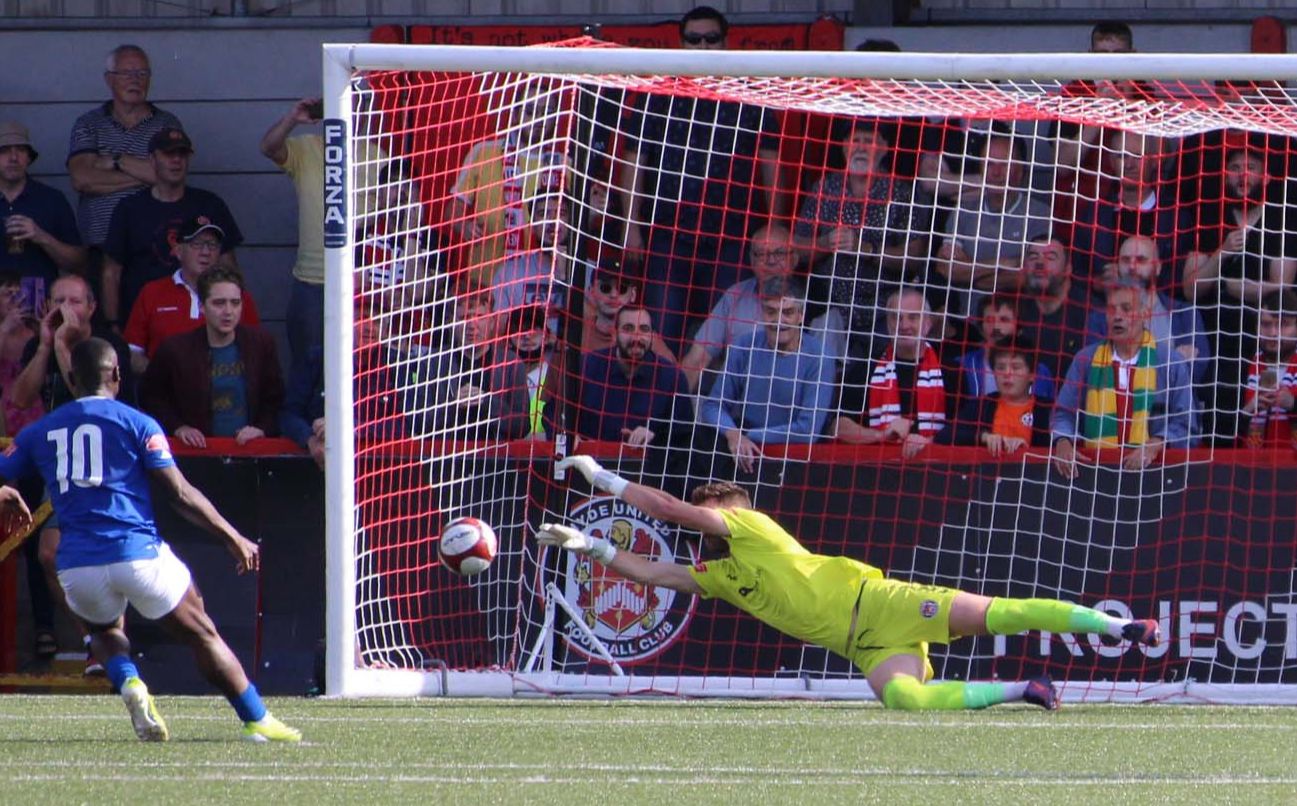 Hyde were 2-0 up within half an hour, with goals from Liam Hardy and Harry Benns putting the home side in control.

Despite this the away side rallied and managed to half the deficit through Aaron Morris’ tap in on 61 minutes, after Finlay Sinclair-Smith’s dipping freekick rattled Joe Green’s crossbar and rebounded back to the waiting Morris.

Cedric Main could have saved a point for The Rebels but his penalty was palmed away by Green.

Interim Hyde manager John McCombe has now led the club to successive victories following the resignation of David McGurk, but he has not applied for the full time position with the club set to hold interviews for the vacancy this week.

McCombe made one change from the side that beat Grantham Town 3-0 on Tuesday night, with Harry Benns restored to the starting line up in place of Cameron Fogerty.

Away manager Neil Reynolds had to make a change in goal, with Dan Lavercombe missing out late on with food poisoning.  New signing Lewis King came in after rejoining the club this morning, after first playing for the club in 2015.

Visitors start well, but Hyde well in control even before red card

The visitors started brighter, with Main looking a threat every time he got on the ball in the Hyde half in the opening 20 minutes, with the home side often doubling up on him.

Ennis had a shot palmed over the bar by Green within the first three minutes, but the visitors couldn’t take advantage of their good start.

Against the run of play, Hyde opened the scoring on 12 minutes through Hardy who now has four for the season.

FC failed to clear a Liam Tongue corner and Hardy stabbed the ball home to give his side the lead.

The goal was the catalyst for Hyde to take control of the rest of the half, buoyed by going ahead and looking dangerous on the counter attack.

Benns doubled his side’s advantage just before the half hour as Hyde went on the counter again, converting a Tom Pratt cross from the left side to open his account for the season.

An off the ball incident between Ennis and Kingsley James provoked a long debate between referee Matthew McQuillan and his linesman, which resulted in a straight red for the forward.

The game always felt like it had a bit of needle even before Ennis’ sending off, but this was taken up a notch as FC were left a man and two goals down.

With his side trailing, away manager Neil Reynolds gambled early and made a triple substitution at half time, bringing on Matty Rain, Sinclair-Smith and Ali Waddecar in place of Jordan Simpson, Jamie Cooke and Regan Linney.

Referee McQuillan didn’t endear himself to the large number of away fans, waving away penalty shouts as Cedric Main tumbled under a challenge from Jordan Fagbola in the box and missing some clear fouls.

It was obvious Reynolds had fired his team up as they attempted to fight their way back into the game.

Sinclair-Smith made a real difference to his team going forward, and had a cracking shot just tipped over the bar by Green before the visitors pulled a goal back.

The comeback looked near complete when the referee did award a penalty to the visitors, after sub Waddecar was pulled down in the box. Main stepped up, but his low drive was pushed away by Green who guessed the right way. The keeper was again on hand to keep his side ahead after FC tried to score from the rebound.

Both sides pushed for another goal in the closing stages, and Hyde had a goal chalked off as Brad Roscoe’s headed goal was chalked off.

Both Green and Hyde were berated by FC fans for time wasting, but they managed the game out well despite FC having a much better second half than their rivals.

FC United manager Neil Reynolds said: “Well done to Hyde, but in the second half there was only one team going to get back into it and that was us.  We left ourselves too much to do before half time.
“Our first half performance was nowhere near good enough, which I told the lads at half time. People just didn’t perform today, and there’s now a pattern of some players who aren’t performing. I’ve got a sick feeling in my stomach now after that first half.  I thought Mike Potts was magnificent, the subs came on and were winning aerial battles so there are some positives.”
“I didn’t see the red card so can’t comment on that. I’ve watched the video for the first goal and it’s a shocking decision.  The linesman’s flagging for offside and the referee should hang his head in shame for giving it.”

The Tigers have now overtaken The Rebels in the table thanks to today’s result.  Hyde have six points, with FC on five points with one win so far.