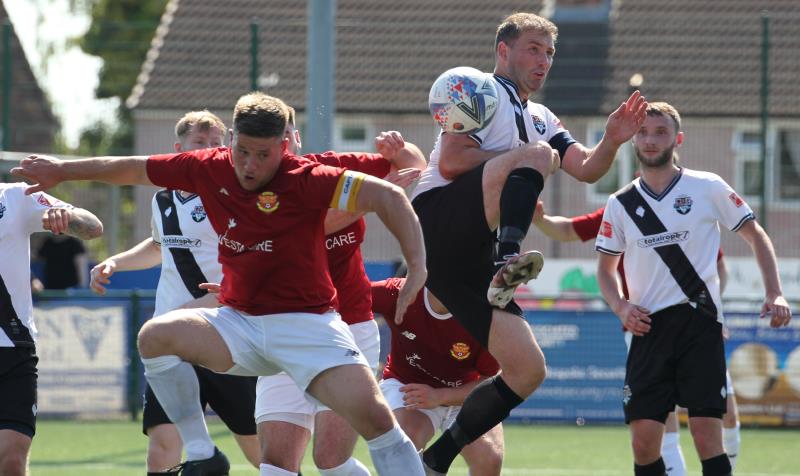 Fish has 14 players signed up so far to play for the Seel Park outfit this season as the team look to escape Step 4 for the first time since the 2007/8 season.

The manager - who joined the club mid pandemic last June - wants to add four to five more players ahead of his side’s first league game against Bootle on August 14.

“We need to be up and around the playoffs this year.  To say we will win the league would be hugely ambitious - there are teams in this league like Marine, Clitheroe and Leek Town who have big budgets and lots of experience. They’re likely to be up there. If we can make the playoffs and have a good cup run, then that will be a good season,” he said.

With trialists making up a sizable percentage of his team, the manager is clear on which areas he needs to strengthen before the season begins, despite heavy friendly wins over former club Chadderton (6-2) and Golcar United (5-1). A 2-1 defeat to Avro in scorching temperatures at the weekend gave him the opportunity to run his eye over potential recruits.

“We need to add players up front and out wide - the lads playing at forward and both left wing backs today were on trial, and they did well. I think we may have found solutions to our problems today.“The heat affected the game a lot today, we normally play a high pressing game and you can’t do that in this heat. We had to talk about managing conditions today - being patient and trying to draw them out of position.  It was a good workout in tough conditions - we gave away a soft goal at the start of the second half which is disappointing, but there’s a lot more to get out of preseason than the result,” he said.

The Lilywhites host Bootle on the season’s opening day, and Fish is happy with the fixture - with their opponents newly promoted from the North West Counties League Premier Division.

Joe Doran’s side were elevated as part of the pyramid restructuring that has seen the NPL gain an extra Midlands division at Step 4.

“Bootle are a fairly typical Scouse side - competitive, in your face, some of their lads have been around a bit and know where the goal is. Whenever you play a team from Liverpool it’s a tough game - I’ve never played an easy one. What we can do is prepare well, watch them and make sure we execute ourselves. It’s one we should win - I would take a home game against a newly promoted team every year,” he said.

With all non-league football below the National League being expunged, Fish has so far only taken charge of Mossley for seven league games despite being in charge for over a year. It’s clearly a source of frustration.

“It feels like we’ve done four preseasons - we had a very strange preseason last year during the pandemic, then stopping and bringing the lads back in again for another preseason. It’s been very difficult to get a run and find out what your players can deliver because they can’t get in their stride. Lads like Andy Keogh, who’s 33 now,  have lost 18 months of football - it’s a big gap to fill. Just trying to get them back up to speed with full match fitness has been a challenge. I’m hoping for as uninterrupted a season as possible this year.”