Simon Rusk’s ten-man Stockport County side fell to an abject 3-0 defeat to Yeovil Town and have now gone three games without a goal. 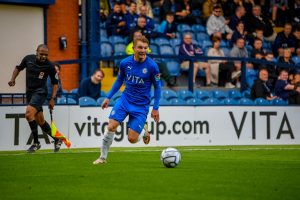 Ash Palmer’s straight red card just before the hour further turned the game into an uphill battle for The Hatters, who were already chasing the game.

Centre back Palmer was dismissed after tangling with Tom Knowles in the box, conceding a penalty and receiving his marching orders.

Substitute Adi Yussuf wrapped up a deserved victory for Yeovil late on after breaking the offside trap and slotting past Ben Hinchliffe.

Scott Quigley’s fifth goal of the season had doubled the advantage for the visitors from the penalty spot.

Charlie Wakefield had opened the scoring midway through the first half, when his low shot from the edge of the area evaded Hinchliffe in the home goal, going in off the post.

County started the game brightly, maintaining possession and putting early pressure on the away side, without creating anything to break the deadlock.

In a scrappy opening twenty minutes there wasn’t much quality on show, but the teams appeared quite evenly matched before Wakefield opened the scoring.

Rusk’s side seemed to lose their heads after conceding the first goal, losing possession needlessly, while both teams were guilty of misplaced passes in the early going.

County came out from the break in positive fashion, with shots from Alex Reid and Ryan Croasdale not far away.

The red card was the pivotal moment of the game, with Palmer looking devastated to be sent off, County’s first red card of the season.

Boos rang out from the stands at both half and full time as the home supporters voiced their discontent with the football on offer today.

It was a poor result and performance from The Hatters, who continue to perform below the high expectations set this season.

Rusk now faces a long trip to Maidenhead United on Tuesday night, with the task of rallying his troops and getting the fans back on side. .

Goals in either half for Yeovil

It’s now three straight wins for Yeovil, and three without a win for County, as the sides go in opposite directions in the league table.

Wakefield had looked dangerous down the right wing in the early part of the game, but looked more likely to provide an assist than get the opener.

Yeovil were buoyed by the goal and looked likely to go further ahead, with County looking vulnerable after conceding.

Dale Gorman almost doubled the visitors’ advantage before half time, with a long range strike that was acrobatically kept out by Hinchliffe and touched over for a corner.

The home fans were clearly frustrated with their side, who seemed desperately short on ideas.

There were glimpses of something better from County, with Alex Reid unlucky not to get himself on the scoresheet on more than one occasion.

Macaulay Southam-Hales and Tom Walker showed promise down the wings and looked the most likely to unlock a resolute visiting defence.

It was a positive start from County after the break, forcing consecutive corners, with Reid’s header not far away from restoring parity.

Rusk made two changes from the previous game at Boreham Wood, bringing captain Liam Hogan and Reid back into the side, with Will Collar dropping to the bench and Jordan Keane not in the squad.

Tom Walker came off the bench after just 33 minutes to replace Arjan Raikhy. He quickly became involved, having a strike deflected behind for a corner and providing a great cross into the box which Reid narrowly missed heading into Grant Smith’s goal.

New signings Zeki Fryers and Kenan Dunnwald-Turan both came off the bench for debuts after signing for the club this morning.

The County boss held a long inquest with the players following the game and will need a much improved performance on Tuesday night.