Kidderminster Harriers are up to fourth in the Vanarama National League North after recording a fifth successive victory at the expense of Boston United. 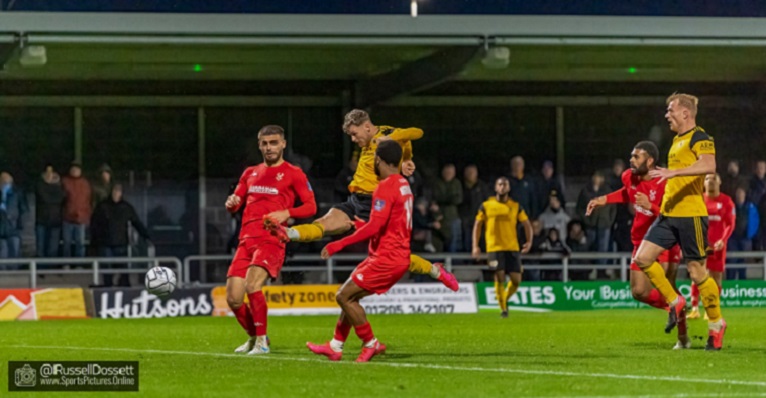 With Kidderminster Harriers’ FA Cup success behind them after beating Halifax Town, they returned to league action against Boston United. Ahead of the game, The Pilgrims were a point ahead of Kidderminster while also playing two games more than the away side. This game was set up to be a big clash at the top of the table.

Boston made two changes from their previous win against Darlington. Kyron Gordon and Jake Wright Jr. were preferred over Scott Garner and Danny Elliott. The Harriers lined up with an unchanged side from their FA Cup tie.

Boston go in behind despite early pressure

The game got underway at the Jakemans Community Stadium, and it was an unfortunate start for Boston as the injured Paul Green was forced off to be replaced by Jordan Preston. The home side did threaten first, forcing Luke Simpson into an early save.
However, it was the Harriers who broke the deadlock in the 13th minute. Alex Penny latched onto an Ashley Hemmings corner at the back-post to take the lead. Boston continued to put pressure on the Harriers, forcing Simpson into some solid stops but finished the half with nothing to show for their efforts.

Kidderminster wrap up another win

Boston started the second half the stronger of the two sides, coming close and forcing Simpson into more solid stops. The Pilgrims eventually had their equaliser in the 60th minute from Jake Wright Jr. who tucked the ball home from close range after Nathan Cameron failed to deal with it.

Kidderminster didn’t stay behind for too long as Ashley Hemmings' 76th minute long-range effort took a deflection and looped over Marcus Dewhurst, who didn’t seem to realise it was going in.

The Harriers held strong for the rest of the game and continued their fine run of form.  Russell Penn's side have now won seven on the bounce in all competitions and are unbeaten in nine. They will be looking to continue this form into the coming weeks ahead of their big FA Cup clash against Championship side Reading on January 7.  It's a first defeat in four for Boston, who have slipped to sixth as a result of today's defeat.

Russell Penn is proud of the progression his Kidderminster Harriers side have ...

After reaching the FA Cup Third Round for the first time since ...