Having taken a back seat last weekend due to the majority of clubs being involved in FA Cup action, the National League returns on Saturday with a number of crucial matchups set to take place. 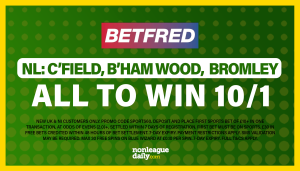 Danny Rowe’s Chesterfield could find themselves top of the table if they are able to beat strugglers Weymouth at home, and Boreham Wood slip up away to Altrincham.

Despite navigating the entirety of October without suffering defeat, Rowe was denied the National League’s Manager of the Month award, with November also starting strongly for the Spireites.

A victory over Southend in the FA Cup last weekend saw the Derbyshire side progress to the Second Round, where they will travel away to League Two Salford City.

Attention returns to a promotion push this weekend, and Rowe’s men will be taking on a Weymouth side who have won one away match in their last six outings on the road.

That victory came in their last trip before the FA Cup weekend, where the Terras were 2-0 victors against lowly Aldershot Town.

Brian Stock’s side are likely to face a entirely different challenge when they come up against the promotion hopefuls, with Chesterfield having won the past two meetings between the pair.

Triumphing by a slender 1-0 margin the last time the two met at the Technique Stadium, another home victory is priced at 4/11, whilst Chesterfield to score over 2.5 goals comes in at 13/8.

Leaders Boreham Wood will be looking to maintain their advantage over those chasing them below, when they make the visit North to face Altrincham.

The hosts have enjoyed an impressive start to the campaign under Phil Parkinson and will enter this tie just six points off the playoffs.

Seven wins from their first 11 matches had left the Robins with playoff aspirations early on in the campaign, yet a slight drop off in form has seen Altrincham lose their last three National League encounters.

Bucking their run of defeats is unlikely to happen this weekend, as Parkinson’s side will face an in-form Boreham Wood dreaming of the Football League.

Currently top of the fifth tier, Boreham Wood have lost just twice this season and have been steadily improving under long-time manager Luke Garrard.

Having taken charge of the Wood at age 30 in 2015, Garrard remains one of the youngest managers in English Football and will be dreaming of a historic promotion with the Hertfordshire club.

If they have hopes of playing in the Football League next season, victories away to the likes of Altrincham will be crucial and the visitors are 5/4 to win at the JD Davidson Stadium on Saturday.

Stockport County vs Bromley | Under the lights and in the spotlight

Having secured their preferred managerial target in Dave Challinor, the ex-Hartlepool United boss will head into his first home match as Stockport County boss against a side struggling with their own managerial madness.

In a bid to replace the departed Challinor, League Two Hartlepool have earmarked Bromley boss Andy Woodman as the replacement, yet the South London club were quick to squash the rumours on Thursday evening.

Expected to be in charge of their trip to Edgeley Park, Bromley will be looking to extend their strong run of form and could strengthen their position in the playoffs.

They are unbeaten in their previous nine National League match-ups, but have not beaten the Hatters since Stockport were promoted back to the fifth tier in 2019.

Winning their clash in Cheshire during the 2019/20 season, County were held 0-0 at home to Bromley last season, and Challinor will be looking to kick his first match in the Edgeley Park dugout off with a win

Keeping Michael Cheek quiet could prove difficult for County, with the marksman having netted in all but three league matches this season and he is to score anytime.

Should they prevent the Bromley attack, Stockport are 5/6 to secure the three points, whilst an away win comes in at 11/4.

NL | Altrincham looking strong, Yeovil on the up and Grimsby stumbling

Altrincham and Yeovil will look to continue their strong form with another ...