Stockport County struck four away to Wealdstone, whilst there were wins for Southend United, Wrexham and FC Halifax Town in this weekend’s National League action. 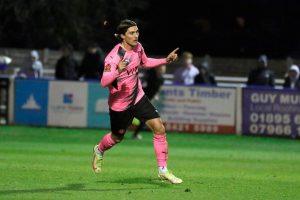 Crankshaw on fire as Country romp past Wealdstone

Ollie Crankshaw’s fine start to life in a Stockport County shirt continued, as he scored a hattrick in the Hatters’ 4-1 demolition of strugglers Wealdstone.

Scott Quigley’s sixth goal in seven games opened the scoring in the first half, before three second half strikes from Crankshaw sailed the promotion hopefuls clear.

A late Ira Jackson goal was nothing more than a consolation for Wealdstone, with Stockport now up to eighth and into the playoffs.

Southend United held off a late Altrincham attack to pick up just their second win in the National League since the first weekend over October.

Taking the lead after one minute, Rhys Murphy’s early strike was followed up by Sam Dalby’s fourth goal of the campaign midway through the half.

Dan Mooney pulled one back for Altrincham in the second period, yet it proved too little as the Shrimpers held on for three points.

FC Halifax Town were on the right end of a five-goal thriller, as they saw off Torquay United 3-2 at Plainmoor.

Jordan Slew netted twice either side of the break to steer the visitors clear, with Billy Waters seemingly sealing the win after 50 minutes.

A spirited Torquay comeback saw them score twice in added-time through Klaidi Lolos and Armani Little, but they were unable to find a third – Halifax advance into third place, cutting the gap to Boreham Wood and leaders Chesterfield who were both out of action this weekend.

Phil Parkinson’s reign as Wrexham manager has taken a turn for the better in recent weeks, with their fourth win in five matches coming at home to Bromley.

Their job was made slightly easier early on, as Liam Trotter was handed his marching orders after just nine minutes.

With a man advantage the goals began to flow for Wrexham, scoring first through Reece Hall-Johnson, before Paul Mullin netted his 10th goal of the campaign to seal the win.

Aldershot were slender 1-0 winners away to King’s Lynn Town, with the visitors now marooned inside the National League drop zone.

It’s good news for Mark Moseley, with his side now up to 18th, whilst King’s Lynn are winless in nine National League matches.

A late Adi Yussuf goal denied bottom-placed Dover Athletic a first win of the campaign, during a tight battle at Huish Park.

No side in the National League had taken more points in the previous five games heading into the fixture, yet the Glovers found themselves behind after just two minutes through TJ Bramble’s opener.

Dover came within 12 minutes of a memorable victory, but were denied through Yussuf’s late strike 12 minutes from time.

Notts County had to work hard to take three points against Dagenham & Redbridge, scoring deep in the second half to secure the win.

Frank Vincent found the net after 36 minutes to send Meadow Lane into raptures, only to be silenced by Angelo Balanta’s leveller eight minutes later.

Kyle Wootton was on hand to put Notts County back in-front with 16 minutes left on the clock, ensuring the Magpies maintained their position in the playoffs.

Dean Brennan’s revival as Barnet boss continued away to Woking, as the Bees picked up a 2-1 victory at the Kingfield Stadium.

Woking had taken the lead after two minutes, courtesy of Joe McNerney’s early strike, yet Adam Marriot netted for Barnet to ensure parity at the break.

It would be Marriot who netted the winner in the 90th-minute, with Barnet now sitting pretty in 15th place, whilst eight points clear of the drop zone.

Less than two weeks since signing on the dotted line for Stockport ...