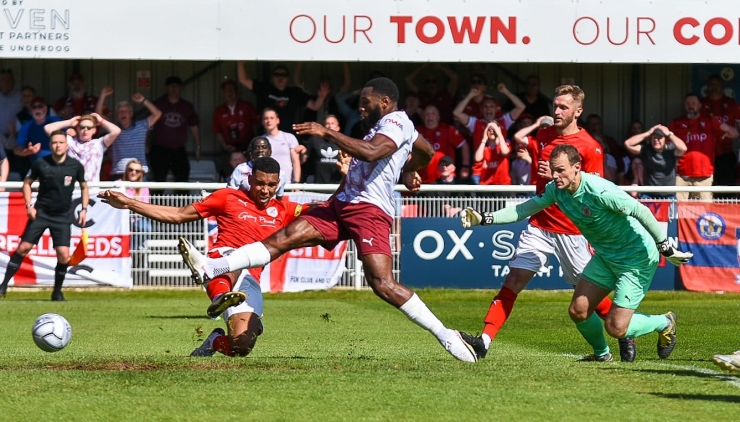 York City and Dorking Wanderers can kiss goodbye to regional football, as both sides won their respective National League North and South play-off finals. York had to work hard to beat Boston United 2-0 at home, whereas Dorking Wanderers somehow managed to beat 3-2 Ebbsfleet United in a thrilling encounter. All of which capped off a pulsating season in the National League North and South.

York finally makes it back to the National League

Many people will be surprised that it has taken York City so long to get out of the National League North. For a club of its size and history, York ought to have escaped regional football much sooner than this, and the emotions were there to see at Saturday’s game.

It wasn’t the prettiest game of football in the world, but York’s 2-0 win over Boston will see them back in the National League for the first time in five years. With a massive crowd of 7,448 to cheer the home side on, Lenell John-Lewis scored York’s first after just five minutes to put those early nerves to rest.

However, Boston just wouldn’t give up and they routinely gave the home side some real scares until winger Maziar Kouhyar scored York’s second in the 86th minute. Thankfully there was little in the way of the stadium-trashing antics that York fans displayed in their play-off win over Chorley, and instead the Minstermen can finally look forward to playing National League football next season. They will join Gateshead who won automatic promotion from the National League North and hopes are high that York will be back to their best after many dismal seasons.

Dorking do it the hard way

While Dorking Wanderers should have made light work of Ebbsfleet United, they certainly didn’t have an easy time of it in Saturday’s big game. Ebbsfleet’s Rakish Bingham stunned the home crowd with a goal in the 22nd minute before James McShane evened things up just before the end of the first half.

From here, the second half was a bitter battle with plenty of chances, and when Craig Tanner scored for Ebbsfleet in the 92nd minute, it looked like the Kent side had won. However, Dorking had other ideas and Luke Moore equalised in the ninth minute of extra time. From here, Alfie Rutherford claimed the dramatic winner for Dorking and it was enough to send the team up to the National League. Such a result would have shocked the travelling faithful from Ebbsfleet, but such outcomes are commonplace in the playoffs of non-league football.

Dorking will feel that the result was only fair considering that they were actually top of the National League South when the season was cancelled last year at the height of the pandemic. It means that Dorking will gain promotion alongside the automatically promoted Maidstone United.