Stockport County put in a five-star performance to take Boxing Day’s biggest victory in the National League against Altrincham. 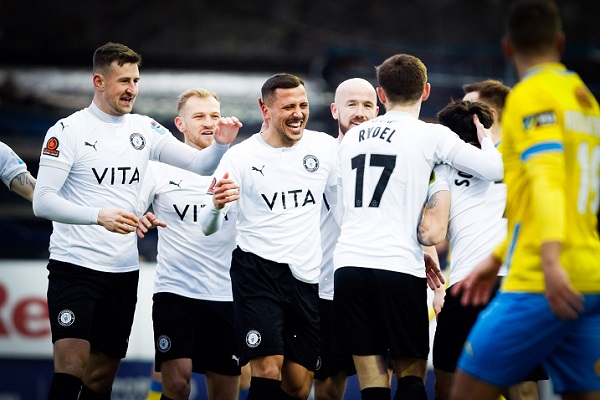 Dave Challinor’s side picked up a 5-1 win in front of a bumper crowd of 8,896 - the day’s highest attendance outside the top two divisions.

It’s a return to winning ways for The Hatters after defeat in their last league game to Torquay United.

Antoni Sarcevic, Paddy Madden, Scott Quigley, Will Collar and Ollie Crankshaw were all on target, with the game as good as won at half time with County 4-1 up.

Altrincham’s goal came when they were trailing 3-0, with Ryan Croasdale putting through his own net just after the half hour.

The Robins are now without a win in their last five league outings, and face Wrexham tomorrow at Moss Lane in a bid to end that run. County travel to Solihull Moors.

Three wins in a row for Torquay United

Improving Torquay United picked up an impressive 3-0 win over Yeovil Town - handing their opponents a first defeat in nine games.

Second half goals from Ben Wynter, Jack Sparkes and Joe Lewis wrapped up the points for Gary Johnson’s side who are up to 12th in the table.

The Glovers’ Sonny Blu Lo-Everton received a red card with the game still goalless and with 25 minutes left on the clock.

The sending off proved to be crucial, with the home side ruthlessly taking advantage of the extra man and putting the game to bed.

To make matters worse for Yeovil, goalkeeper Grant Smith was also dismissed after the match.

Daggers back in playoff hunt

Matt Robinson’s first half brace was enough for Darryl McMahon’s side to take a victory over winless Dover.

The Daggers have recovered from a wobble and now sit just one win outside the playoffs, and they remain the division’s top scorers.

It’s looking hopeless for Dover, who are still on -8 points and approaching a year since their last victory.

All square at Aldershot Town and Bromley

A pair of 1-1 draws round out the day’s action. Aldershot Town and Woking shared the spoils with two late goals, while Bromley were held by Southend United at Hayes Lane.

The Shots finished the game with ten men as Alfie Saunders received a second half straight red card.

Corie Andrews finally broke the deadlock in the 86th minute for the home side. Woking rescued a point deep in injury time with Max Kretzschmar’s penalty.

Bromley took the lead through Michael Cheek midway through the second half, but Southend were level within two minutes. Matt Dennis hit his second goal in as many games to ensure the sides left with a point apiece.

The division’s other games were all postponed.

Having been denied three points against Bromley after Liam Hogan bundled into ...

Dave Challinor | Is he the best man for the Stockport County job?

As the final credits roll on Dave Challinor’s tenure as Hartlepool United ...

Less than two weeks since signing on the dotted line for Stockport ...