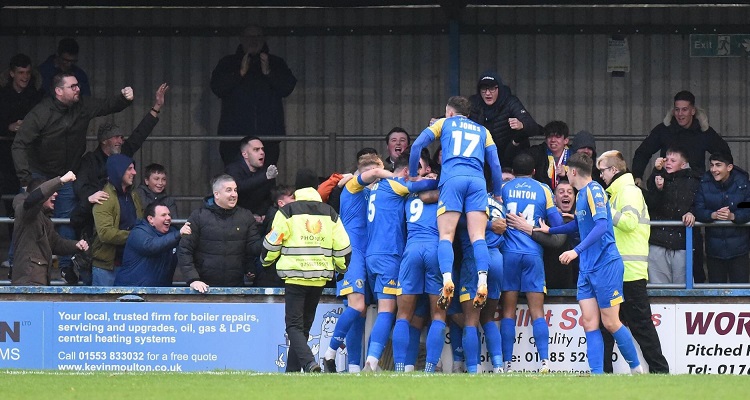 Chesterfield continue to lead the way

On a good day for the division’s leading sides, the top six teams all won their games, but Chesterfield left it late.

There were only six minutes left on the clock when Tshimanga scored the game’s only goal at Blundell Park.  The division’s top scorer is now up to 18 for the season.

James Rowe’s side are unbeaten in nine games, although Grimsby are going in the opposite direction - with six defeats in the last seven.  The Mariners have slipped out of the playoffs following today’s games.

Boreham Wood keep the pressure on at the top

Luke Garrard’s Boreham Wood continue to keep Chesterfield honest at the top after a 2-0 win at Woking.

Kane Smith and Gus Mafuta wrapped up the points within the first quarter-hour of the game, and held on to their lead.  It’s a fourth clean sheet in the past six league games, who also shut out local rivals St Albans City in Monday’s FA Cup second round match.

It’s a third straight loss for Woking, who face Yeovil Town in the FA Trophy next week.

Bromley, FC Halifax Town and Wrexham all picked up 1-0 victories to consolidate their places in the playoff positions.

Bromley won at Altrincham thanks to Omar Sowunmi’s first half goal, with Halifax beating Wealdstone with Matty Warburton’s penalty.

Jordan Davies’ goal on the half hour gave Wrexham victory over Weymouth in the late kickoff.

Notts County and Solihull Moors round out the playoff places, with both picking up impressive wins.

The Magpies were too good for Southend United and took a 4-1 victory at Meadow Lane.

Sam Dalby had put the visitors ahead after ten minutes, but that was as good as it got for Southend.  Kyle Wootton hit a brace, with Callum Roberts and Kyle Cameron also on the scoresheet.

Solihull moved into the top seven with a strong 4-0 win at Maidenhead United.

Moors scored twice in both halves, with Joe Sbarra and Harry Boyes netting before the break.  Jamey Osborne and Justin Donawa rounded out the victory before the hour mark.

New King’s Lynn Town boss Tommy Widdrington got off to a winning start in the battle of the division’s bottom two clubs.

The Linnets’ broke their eight game losing streak with a 2-1 home win over stricken Dover Athletic.

Josh Barrett scored either side of the break for the home side, with Harry Ransom equalising to take the teams in level at half time.

This result leaves Dover 19 points behind their nearest rivals and 23 away from safety as we approach the halfway point of the season.

Torquay United consigned Dave Challinor to his first defeat as Stockport County boss, with the Seagulls winning 2-1 at Plainmoor.

Will Collar scored twice in as many minutes in the first half time - putting through his own net to hand Torquay the lead before rallying to find the equaliser.

Aldershot Town continued their impressive recent form with a 3-0 win at Eastleigh.

After a goalless first half, Corie Andrews grabbed a brace either side of Lewis Kinsella’s goal.  Aldershot have now picked up 13 points from their last five games.

Yeovil Town extended their unbeaten run to eight games with a 1-0 victory over Barnet. Adi Yussuf’s early goal was enough for The Glovers,  who have climbed into the top ten.