NL | Stockport and Wrexham show no signs of Christmas hangover

Stockport County and Wrexham enjoyed potentially season-defining victories, as the top two in the National League drop points against each other. 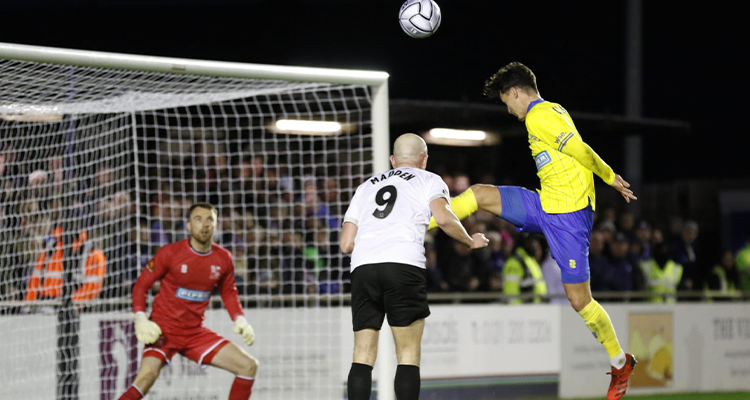 A late Jack Clarke strike salvaged a much-needed point for leaders Chesterfield against second-placed FC Halifax Town, in front of a bumper sell-out crowd at the Technique Stadium.

Over 8,000 expectant Spireites supporters were silenced after just 18 minutes, when Matthew Warburton fired Halifax in front.

With work to do in the second half, Chesterfield thought they’d been given the chance to equalise from the spot with 20 minutes to play, only for the referee to overturn his decision, making Clarke’s late leveller all the more relieving.

A second-half Paddy Madden header was enough for Stockport County to escape a tricky test against Solihull Moors with all three points.

Resilient at the back for much of the contest, Solihull were eventually breached with only 17 minutes left to play, when Madden netted his ninth goal of the campaign.

The victory lifts Dave Challinor’s side up to sixth in table, above their opponents and within four points of leaders Chesterfield.

No travel sickness for free-scoring Wrexham

Another side able to capitalise on Chesterfield and Halifax’s slip-ups were Wrexham, who confidently despatched a struggling Altrincham 2-0 at the J. Davidson Stadium.

Opening the scoring through Aaron Hayden after 24 minutes, the visitors would enter the break having doubled their advantage, when defender Bryce Joseph Hosannah added a second.

Seeing out the game in the second period, the victory catapults Wrexham up the table, with the Welsh side now sitting comfortably in third.

Woking worried but get the job done

It was far from comfortable for Woking, but they managed to squeeze over the line against Dover Athletic, running out eventual 3-2 winners.

Max Kretzschmar gave Woking the lead from the spot early on, before Jake Goodman equalised for Dover moments later, only for Inih Effiong to restore the hosts’ advantage before the break.

Effiong netted his second of the game and Woking’s third after the interval to seemingly seal the points, but a late Ryan Hanson strike set up a nervy finish.

Eastleigh came from behind to steal three points away from Torquay United, with second-half goals from Tom Whelan and Tyrone Barnett enough to secure a Spitfires’ win.

Armani Little’s 10th league goal of the season had put the visitors in front, but as so often been the case for Torquay this season, a lack of clinical edge cost the Gulls a win.

The result lifts Eastleigh above Torquay in the table, and the Hampshire based club could move to within touching distance of the playoffs should they win their games in hand.

Bromley’s hopes of a maiden promotion to the Football League were dealt a huge blow, as they slipped up away to Maidenhead United, losing 1-0 at York Road.

Without a win in seven matches across all competitions, a Maidenhead victory seemed an unlikely prospect prior to kick-off, yet the hosts found themselves ahead when Nathan Blissett netted midway through the second half.

Only their first defeat to Maidenhead since April 2018, Andy Woodman’s side have now slumped to fifth in the table, with work to do if they wish to earn promotion.

Angelo Balanta’s only goal of the game saw Dagenham & Redbridge edge their clash at home to Aldershot, ending the visitors seven match unbeaten run in the process.

It means the Daggers end the year on a high, with four consecutive victories and Daryl McMahon’s men will be keen to regain a playoff position when 2022 rolls around.

Matt Warburton's move to the EFL with Northampton Town two years ago ...