Both Brackley Town and AFC Fylde took three points from their National League North fixtures, as a player is sent off for biting an opponent. 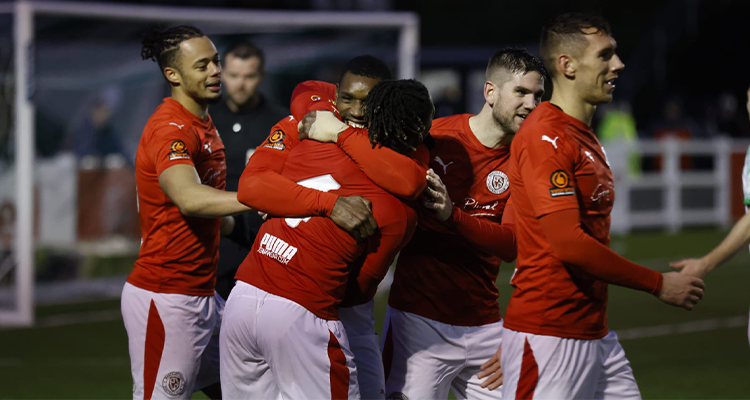 Tre Mitford found an expected breakthrough for the Saints midway through the first half, before James Armson netted a second before the break.

Gloucester City picked up just their third win of the campaign with a 2-0 triumph over Spennymoor Town, in a match that was overshadowed by discipline issues.

Ollie Hulbert opened the scoring moments before half-time, with Matt McClure netting the second after the break, only to be given his marching orders three minutes later for biting a Spennymoor player.

During a mass brawl that broke out involving both sets of players, both Carl Magnay and Brad Abbott were also given a red card.

There would be no fairy-tale start to life in charge of Blyth Spartans for Terry Mitchell, as his side were blown away 4-1 by league leaders Fylde.

Leading 3-0 at the break, Blyth defender Nathan Buddle had bundled into his own goal to give the hosts an early lead, before Sam Osborne and Nick Haughton found the net before half-time.

Haughton would find a second after the restart to make it 4-0, with a JJ O'Donnel penalty five minutes from time offering no consolation to a Blyth side that remain in the drop zone.

Boston show killer instinct to comeback from two down

Boston turned around a two goal deficit away to Kettering Town, before eventually securing a 3-2 victory with plenty of time to spare.

The hosts needed only two minutes to find an opener, with Connor Kennedy netting the game’s first goal after 120 seconds, whilst Jordan Crawford added a second just five minutes later.

Scoring three times either side of the break, Paul Green sent the visitors on their way, with Joe Leesley the man to level it before half-time, only for Jordan Burrow to score the Pilgrims’ winner 22 minutes from time.

A winner in the 95th minute saw manager-less Chester snatch three points with a 2-1 victory at home to Leamington.

Taking the lead themselves after 32 minutes, Patrick Lacey’s opening goal was cancelled out just before the break courtesy of Stephan Morley’s equaliser.

An edgy affair at the DEVA Stadium eventually came to a boil in added time, when James Horsfield popped up with only seconds left to play, stealing all three points for playoff-chasing Chester.

Alfreton Town were able to hang on for a much-needed three points away to Curzon Ashton, defeating the Greater Manchester side 2-1 at the Tameside Stadium.

Craig Hobson had sparked a comeback for the Nash with 13 minutes to play, but it wasn’t to be for Curzon who slump to their second league defeat in a row.

Southport moved to within touching distance of the playoff places with a 2-0 victory over Hereford.

After a goalless first half, Jordan Archer was on target early in the second period, with Connor Woods on hand to add a second with five minutes to play.

The win takes Southport level on points with Hereford, whose run of five consecutive league matches comes to a disappointing end.

York City netted the only goal of the game two minutes from time as they snook a 1-0 victory away to Guiseley.

The visitors were looking to record back-to-back league wins for the first time since October, but struggled to break down a stubborn Guiseley backline.

Kurt Willoughby was the man to eventually pop up with the winner, netting in the 88th minute, leaving the Minstermen the happier out of these two Yorkshire sides.

There were 36 goals across the mid-week National League North fixtures, as ...