An enthralling title race in the National League North will continue when both Brackley Town and AFC Fylde take to the pitch this weekend. 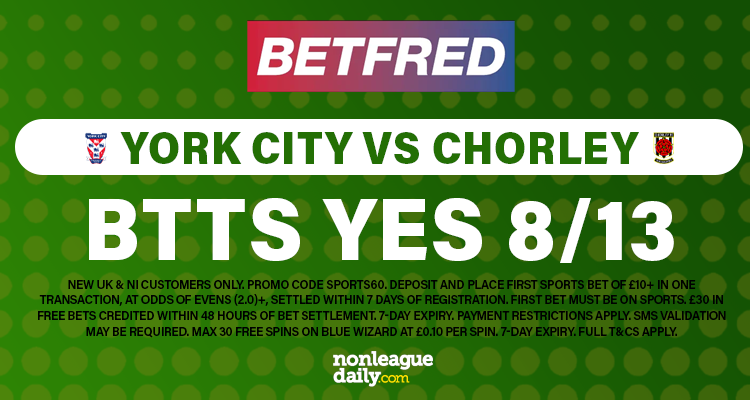 Brackley Town will continue their chase of league leaders AFC Fylde when they host strugglers Guiseley at St James Park this weekend.

Two points behind the Lancashire club, Brackley do have a game in hand to fall back on, but would prefer to maintain the current slender gap between the pair.

Recent history suggests it won’t be a walkover for Brackley, as Guiseley enter the clash having gone unbeaten in the previous two meetings.

Still, expect a comfortable afternoon for Brackley, with the Saints priced at 6/4 to win the match and score over 2.5 goals.

Darlington will welcome leaders Fylde to Mowden Park this weekend, looking to pick up their first-ever victory against the Coasters.

Having faced each other three times, Darlington have never managed to take three points from Fylde, with the Coasters winning the previous two meetings.

Jim Bentley will be hoping his promotion pushing side will be able to make it a trio of wins in a row, as they begin the weekend having lost only one of their last seven matches.

Extending their advantage at the top of the tree looks a likelihood for the visitors, with a -1.0 Fylde handicap coming in a 12/5.

Farsley Celtic will be confident of upsetting the odds when they welcome Gateshead to the Citadel this weekend.

Manager Neil Ross spoke about how impressed he has been with his side since taking over from Adam Lakeland and Farsley will be eyeing up yet another win under his fledgling reign.

A victory would make it three consecutive wins for Farsley, whilst Gateshead have triumphed in their last four consecutive matches.

Ross’ side could make life difficult for Gateshead, making both teams to score at 8/13 a sensible bet.

Fresh from their FA Cup heroics last weekend, Kidderminster Harriers will return to National League North action this week when they travel to Boston United.

The visitors sit one place and one point behind Boston in the playoff spots, with the pair hoping to consolidate their position in the top seven.

Boston will be hoping they’re able to extend a run of three victories over Kidderminster, whilst the away side are targeting their first win at the Jakemans Community Stadium since September 2018.

With the FA Cup likely to take its toll on Kidderminster, Boston will be confident of yet another victory over the Harriers and they come in at 5/4 to take three points.

Of the sides outside the top two, it’s Chorley who are leading the way, with the Magpies set for a tricky test away to York City this weekend.

York have lost only one of their last three home matches against Chorley, with the pair’s first meeting at the York Community Stadium likely to be a close affair.

Despite their lofty league position, Chorley have won only one of their previous seven matches on the road, offering York a chance on Saturday.

We’re backing both teams to score at 8/13 for this Lancashire vs Yorkshire National League North clash.