There were 36 goals across the mid-week National League North fixtures, as Chorley edged a thriller and Brackley continued their title charge. 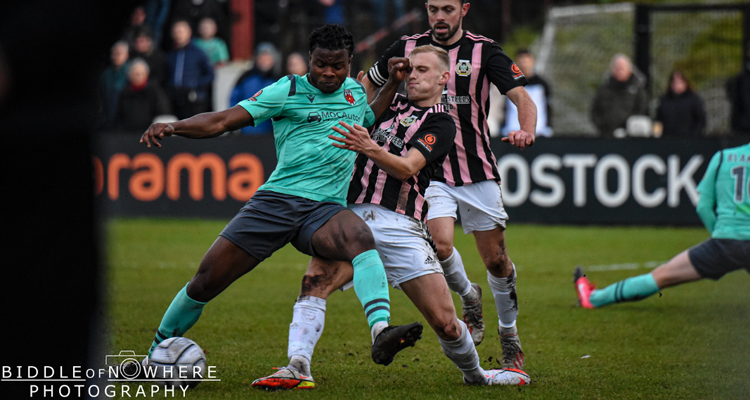 Promotion chasing Chorley scored five minutes from time to steal three points away from a spirited Curzon Ashton side, with the hosts edging a seven-goal thriller.

Harry Cardwell netted twice for Chorley in the first half, the second coming after Jack Dunn had equalised for Curzon Ashton.

The visitors tipped the game on its head early in the second half, with goals from Alex Curran and Tom Peers firing them in front, only for Harvey Smith to equalise for Chorley, all before Jonathan Ustabasi netted the game’s final goal to secure a memorable 4-3 win.

Brackley bounce on with belting win

Brackley Town blew away playoff hopefuls Boston United, with the win enough to ensure the Saints will finish 2021 on top of the National League North table.

Opening the scoring through Lee Ndlovu’s 20th minute strike, the visitors would add a second courtesy of James Armson just before the break.’

Danny Elliott’s penalty halved the deficit midway through the second half, setting up a nervy finish at the Jakemans Community Stadium, but Ndlovu was on hand to pick up a brace, whilst securing three points for Brackley.

Chester were denied three points at the death by AFC Fylde, as the Coasters secured a late point to keep their promotion hopes alive.

After a goalless first half, George Glendon found a breakthrough for Chester, only for the goal to be cancelled out by Nick Haughton’s 13th strike of the campaign.

It had looked as if Darren Stephenson’s goal 10 minutes from time had snatched the victory for Chester, but Ben Tollitt popped up in added-time to ensure Fylde didn’t go home empty-handed.

Southport maintained their position in the playoff spots with a convincing 4-0 victory over relegation threatened Farsley Celtic.

Scoring all four goals in the first half, a brace each for Jack Bainbridge and Jordan Archer fired Southport into an unassailable position at the break.

The victory means Southport move above Boston into sixth, with the Sandgrounders know hoping to continue their strong form into the new year.

Blyth Spartans picked up a crucial victory in their bid to escape the drop, as they triumphed 3-1 over a stuttering Spennymoor Town.

JJ O'Donnel’s first half strike had seen the hosts lead at the break, but the ever-impressive Glen Taylor stuck back for Spennymoor shortly after the interval.

In desperate need of points at the wrong end of the table, Farsley scored twice through Toby Lees and Connor Thomson, sealing a much-needed victory at Croft Park.

Gateshead glory keeps them in touch at top

Gateshead continue their imperious form with a 3-1 victory away to Darlington, ensuring they kept touch with the league leaders Brackley.

Macaulay Langstaff fired the visitors ahead in the second half, with Darlington’s Luke Charman seemingly dealing a killer blow to Gateshead, when he equalised with 16 minutes to play.

In the midst of a now seven match league winning streak, Gateshead continued to press and were given their rewards when Cedwyn Scott and Langstaff netted the eventual winners late on.

Nothing could separate either Guiseley or Bradford Park Avenue, with the two relegation contenders playing out a tense 2-2 draw.

Jake Hull had fired the hosts in front, before Dylan Mottley-Henry equalised for Bradford midway through the second half and Brad Dockerty netted what looked to be the winners late on.

The visitors would be denied three points when Regan Hutchinson popped up in added time to snatch a point for Guiseley.

Spirited Telford fight back against Leamington

Leamington’s playoff hopes were dealt a blow when two late AFC Telford goals denied them all three points in an entertaining 2-2 draw.

Opening the scoring in the first half through Junior English, the game appeared to have been put out of Telford’s reach when Dan Turner added a second with 15 minutes to play.

Veteran defender Paddy McLaughlin netted the only goal of the game midway through the second half, ensuring York’s winning run over Alfreton was extended to four matches.

The result puts the Minstermen back into playoff contention, whilst Alfreton slip down into mid-table.

Curzon Ashton left it late against Chester, with crucial wins for Gateshead ...