AFC Fylde and Brackley Town will be targeting three points to maintain their position at the top of the National League North this weekend, with plenty to look forward to elsewhere in the division. 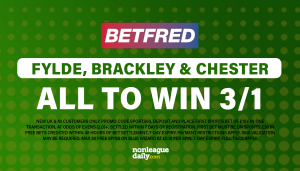 AFC Fylde will look to maintain their position at the top of the National League table when they welcome strugglers Blyth Spartans to Mill Farm this weekend.

Terry Mitchell will take to the Blyth dugout for the fist time this season, yet he’ll be coming up against a team his new side have never beaten.

Astonishing 5-1 winners the previous time the pair met in 2014, Fylde are clear favourites for three points at 2/7, whilst the visitors will be looking to cause an upset in Lancashire and they’re 7/1 to secure a win with Betfred.

Brackley Town will be looking to take advantage of any Fylde slip ups when they travel to an out of sorts Bradford Park Avenue.

Bradford PA have registered just one win in four matches and they’ll be hoping to avoid the 8-0 drubbing they suffered at the hands of Brackley in September 2019.

By contrast, Brackley sit two points behind Fylde with a game in hand and they’ll be expected to extend their run of three straight wins against Bradford PA, and the Saints are priced at 4/9 to do so on Betfred.

Chester will continue their stuttering National League North campaign when they host playoff chasing Leamington at the Deva Stadium.

Leamington will travel to the Chester in the knowledge a win could see them climb into the playoff spots, whilst the hosts are looking to drag themselves away from the drop zone.

A run of two wins in 10 National League North matches saw co-managers Anthony Johnson and Bernard Morley sacked, and manager-less Chester are 6/5 to sneak a win, whilst Leamington come in at 9/5 with Betfred.

Gloucester City could find themselves outside the relegation places with a win at home to mid-table Spennymoor Town on Saturday afternoon.

Having won one of their first 12 league matches to start the campaign, Gloucester have enjoyed an upturn in form of late and they enter the weekend with just one defeat in their previous four across all competitions.

A win against Spennymoor is priced at 13/8 for Gloucester, whilst the visitors come in at 13/10 with Betfred to take three points in Gloucestershire.

Guiseley vs York City: the Minstermen target three points in all Yorkshire meeting

York City’s pursuit of the National League North playoff spaces will continue when they make the journey West this weekend.

It’s three matches without a win for York, who have drifted six places below the playoff spots, whilst Guiseley sit a precarious two points above the drop zone.

There is much to play for in this Yorkshire derby, with Guiseley coming in at 23/10 and the hosts priced at 20/21 on Betfred for the three points.

What a difference a Dave makes... - In depth with Chester fan & Liverpool Echo writer Dave Powell

Writing about a football club for a living is just about the ...