AFC Fylde stay top of the National League North as they earn a crucial point against Brackley Town, whilst Chorley cut the gap to just five points. 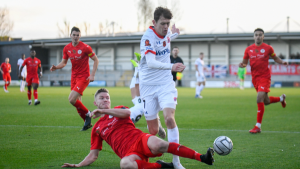 AFC Fylde and Brackley Town battle it out in the National League North - Credit: @SteveMacPix (Twitter)

Neither AFC Fylde or Brackley Town were able to pull clear at the top of the National League North, with the pair playing out an entertaining 3-3 draw at Mill Farm Stadium.

In a match that saw the lead change hands on three occasions, an early Wesley York goal had put Brackley ahead, before two second-half strikes from Nick Haughton and Emeka Obi fired Fylde in front.

Lee Ndlovu equalised midway through the second period for the visitors, until Haughton scored what looked to be a winner for the Coasters, only for Tre Mitford’s 94th-minute effort to steal a point at the death for Brackley.

Chorley take advantage as they close in on top

Chorley picked up their first win since December 2015 over Leamington, with a 1-0 victory that sees them cut the gap to the top two in the National League North.

Connor Hall netted the only goal of the game just before the break, taking his tally to five goals from what is turning out to be a fruitful campaign.

The Magpies now sit five points behind Fylde and Brackley in third-place, with Chorley set to face the Coasters twice in a week during next month’s festive double-header.

Boston had started Saturday afternoon in fifth place, yet a Markus Carver hat-trick, sandwiched in between Jordan Archer’s third league goal of the campaign, saw them succumb to a surprise defeat.

Fraser Preston’s second-half strike had reduced the deficit to one, yet United were unable to spark the comeback required.

Kettering cruise as Blyth bullied away from home

Kettering Town blew Blyth Spartans away, as the hosts struck four without reply to move into mid-table.

Callum Powell opened the scoring for Kettering, whilst Connor Kennedy netted a second-half brace, before Gerry McDonagh added a fourth 16 minutes from time.

A miserable afternoon for Blyth was made even worse when Aaron Cunningham was sent off in added-time.

Kidderminster too good for troubled Telford

Three goals either side of the break gave Kidderminster Harriers a resounding victory over Telford United, whose troublesome season continues.

Alex Penny and Ashley Hemmings struck in the first period for the hosts, before the win was capped off by Nathan Cameron’s second half strike.

It’s now just one win in the last 13 games for Telford, who only sit outside the relegation zone on goal difference.

Gateshead came from behind to sneak a victory against Alfreton Town – a result that moves the Tynesiders up to ninth in the National League table.

Dayle Southwell was on target in the first half to put the visitors ahead, all before Cedwyn Scott levelled it for Gateshead 15 minutes from time.

The drama wasn’t to stop there, as Greg Olley popped up in the third minute of time added on to steal three points for playoff chasing outfit.

Hereford took the lead on the brink of half time through Ryan Lloyd, before Ryan McLean secured their first win in four during the second period.

Whereas 18-year-old Ollie Hulbert struck twice for Gloucester as they saw off Farsley, with the result steering them clear of the relegation zone.

Curzon and Chester held at home

Both Curzon Ashton and Chester were held to draws at home, with York City and Darlington proving stubborn opponents.

Chester struck twice in the second half to come from two goals behind against Darlington, with goals from Kevin Roberts and Josh Askew securing a point.

However, there would be no goals between Curzon and York, with the Tameside based outfit maintaining their position in the playoffs.

There were 36 goals across the mid-week National League North fixtures, as ...