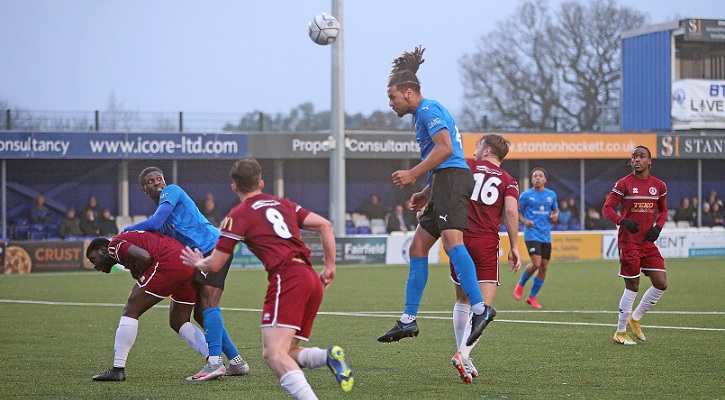 Ebbsfleet United are the National League South’s third leaders in as many weeks after picking up a 3-0 win over Bath City.

Dennis Kutreib’s side took full advantage of the reduced fixture list to move to the top of the pile on goal difference.

With many sides involved in FA Trophy action, only three fixtures went ahead in the league, with previous leaders Oxford City not playing at all.

A brace either side of half time for Elliott Romain, and another goal for Dom Poleon wrapped up the win.  All three goals were scored within five minutes of the break.

It’s back-to-back wins now for Ebbsfleet who will head into the Christmas period as league leaders. In contrast, Bath have lost their last two and failed to score in either.

Chippenham Town picked up a 2-0 victory over Hemel Hempstead Town in a game that saw both sides have a man sent off.

Dan Griffiths opened the scoring for the visitors before the break, before seeing red in the second half.

The Tudors’ Josh Nembhard received his second yellow card shortly after for a foul on Ola Jawal.

Alefe Santos’ late goal - his second in as many games - sealed the points for Mike Cook’s side.

Bore draw for Billericay and Chelmsford

Bottom of the table Billericay Town played out a goalless draw with fellow strugglers Chelmsford City in the Essex derby.

While a point does little for either side, there were some positives for both sides.  Jody Brown’s side kept a clean sheet for the first time this season, and ended a run of seven straight defeats.

Chelmsford’s own winless streak now stretches to nine games, although they have now picked up a point in back-to-back games.

With only one side being relegated this season, the reverse fixture in April may prove key should neither side improve their form by then.

The next games are the traditional Boxing Day fixtures, and one game stands out as new league leaders Ebbsfleet travel to Dartford.

Any one of four sides could be top of the table after these games, with Ebbsfleet, Oxford City, Dartford and  Dulwich Hamlet separated by just two points.  Oxford are at home to Slough Town.  Dulwich will travel to Welling United hoping to shake off the disappointment of their FA Trophy exit at the hands of surprise packages Plymouth Parkway.

At the other end of the table, Chelmsford City host Braintree Town in another vital game.  A win for either side would allow them to start looking upwards instead of down.  Braintree have improved in recent weeks and taken four points from a possible nine.

Bottom side Billericay are at home against Concord Rangers. Victory would take them into double figures for the season.  They may climb off the foot of the table, if they score a heavy win and Braintree lose by a similar margin.

Ebbsfleet United will look to take advantage of the reduced National League ...

The National League South returns to a full fixture list this weekend, ...

It is one guaranteed to perk the interest of mainstream media should ...

Look beneath the label - In depth with Dulwich's Dom Vose

As peers past and present will attest to, Dominic Vose's credentials have ...