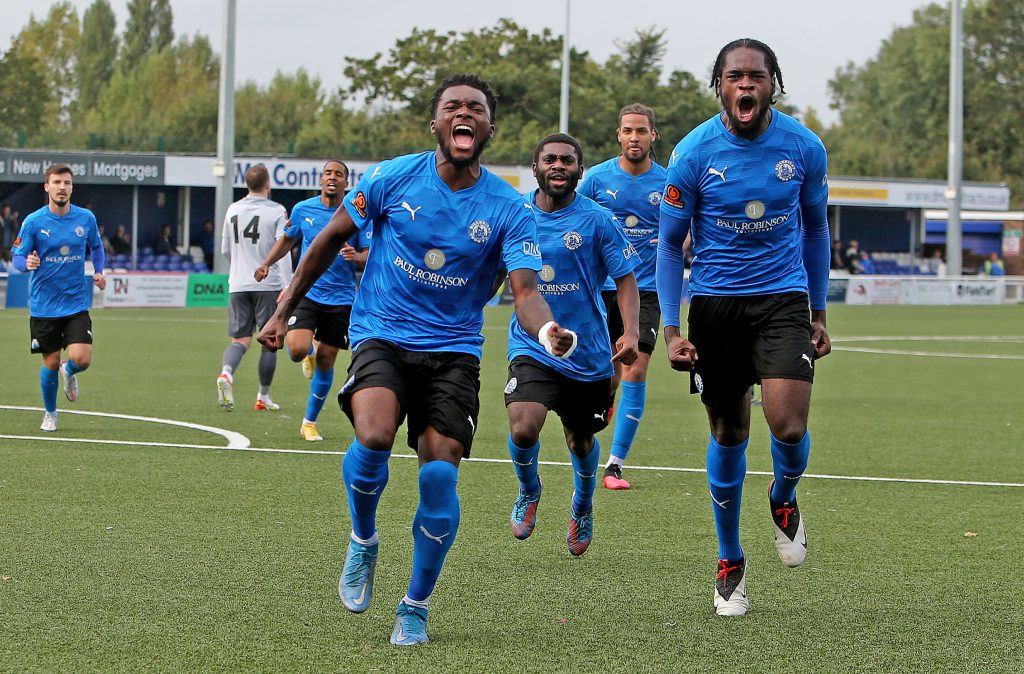 Ademola Shokunbi scored the game’s only goal and wrapped up a second consecutive win for The Wings.

Shokunbi’s first half goal was enough to beat Braintree, who have only one of their nine games so far this season.

Welling took full advantage of the reduced league schedule, with only three games going ahead due to FA Cup qualifying action. They have moved up three places to 14th.

There was also success for another new manager as Jody Brown’s Billericay Town picked up a late 2-1 over Slough Town.

Brown’s side moved above their opponents in the table after Frankie Sutherland’s winner five minutes from time.

Freddie Grant’s screamer had given Slough the lead after seven minutes. The home side pulled level through Kweku Lucan’s 20th minute equaliser.

Billericay’s second win of the season has moved them up to 18th, while Slough drop to second bottom.

Brown joined the club this month after the departure of Kevin Watson and assistant manager Mark Hughes.

All square after action-packed game

Eastbourne Borough and Chippenham Town served up a dramatic game that ended in a 2-2 draw.

The 705 attending today’s game were treated to four goals, three penalties, a red card and a 90th minute equaliser.

Charlie Walker put Boro a goal ahead after just six minutes, and an early red card for the visitors looked to have swung things in Eastbourne’s favour.

Chippenham captain Kieron Parselle was sent off after just 15 minutes, but the ten men rallied and were awarded a penalty five minutes later.

Harvey Bunker duly converted, and added a second spotkick midway through the second half.

The visitors looked to be on their way to an unlikely victory, but sub Josh Oyinsan was pulled down in the box in the last minute.

The referee awarded the day’s third penalty, and Oyinsan scored from the spot to rescue a point for his side.

Eastbourne have moved up to seventh, while Chippenham are in tenth.

NLS | Ebbsfleet United back on top after comfortable win

Craig Tanner’s brace helped steer Ebbsfleet United back to the top of ...