After FA Cup replay action disrupted the midweek fixture list, there was a full Northern Premier League programme this weekend, with a mixed bag of results for Greater Manchester’s side.

Centurian Lambert on Target for Collieries 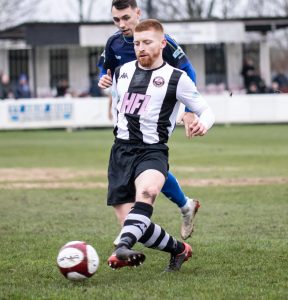 Daniel Lambert was on target for Atherton Collieries in his 100th appearance for the club, as they squeezed past Grantham Town by a slender 1-0 margin.

Alive in the box to pick up the ball following a deflected shot, Lambert fired home from close range to secure the three points for Atherton.

The result continues the Collieries good run of form, with Brad Cooke’s side now up to eighth in the table.

Trafford Triumphant on the Road

Trafford remains unbeaten and are up to third following their impressive 2-0 victory away to Kidsgrove Athletic in the Northern Premier League West.

Alfie Belcher netted the opener just after the break, before Matthew Morgan secured the victory for Trafford from the spot with six minutes to play.

Hopeful of promotion to the Northern Premier League Premier, Danny Caldecott’s side will be on the lookout for points once more when they travel to fellow Greater Manchester side Mossley in midweek.

Ashton United remain winless since their first game of the season, as the Greater Manchester club threw away a lead at home to promotion hopefuls Buxton.

Tom Bentham’s strike after 10 minutes put United ahead, yet the hosts were quickly pegged back when Diego De Girolamo netted his sixth goal of the campaign.

Stalybridge Celtic, FC United of Manchester and Hyde United all suffered defeats, in what was a frustrating afternoon for the Greater Manchester trio.

Jim Gannon was unable to back up his first win as Hyde manager in midweek, with his team succumbing to a disappointing 2-1 loss to league leaders South Shields.

FC United were surprise 3-1 losers to Stafford Rangers at Broadhurst Park, whilst Stalybridge had led against Matlock Town, but were unable to see out the match and ended up losing 2-1.

Ramsbottom United’s strong run of form was put to an end by Prescot Cables, who saw off the Greater Manchester side 2-1.

Leon Johnson netted his second of the game late on to snatch the victory for Prescot, after Jamie Rainford had equalised from the spot for Ramsbottom.

Still in the hunt for a playoff spot, the Rams will face a tricky test against table-toppers Workington on Tuesday evening.

After FA Cup replay action disrupted the midweek fixture list, there was ...

John Welsh: Redmen to Colls man (and plenty in between)

Given John Welsh’s football upbringing – not to mention the 17 professional ...