It was a day of mixed results for the Greater Manchester teams in steps seven and eight, with the tables starting to take shape in the Northern Premier League divisions after Matchday Five. 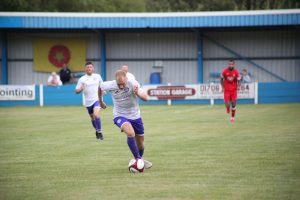 Hyde United stunned FC United of Manchester with an emphatic 2-1 victory, leapfrogging their Greater Manchester rivals in the process.

Racing to a two-goal lead in the first half, with strikes from Liam Hardy and Harry Benn, Hyde had been cruising until Aaron Morris reduced the deficit with 30-minutes to play.

Morris’ second of the season wasn’t enough for the promotion hopefuls, with Neil Reynolds’ side dropping to 14th in the table. Radcliffe are the bank holiday visitors to Broadhurst Park, whilst Hyde travel to Mickleover.

It’s still just one win from five for strugglers Stalybridge Celtic, who succumbed 2-0 away defeat against table-toppers Buxton.

Scoring either side of half-time, Warren Clarke’s double maintained the Derbyshire side’s unbeaten start to the season, with four wins and one draw.

For Stalybridge, their troubles continue and they’ll be hoping Monday’s visit of fellow Tameside club Ashton United will bring about a much needed three points.

Matlock March on with Victory Against Warrington

Matlock Town moved into the playoff spots with an impressive 2-0 victory away to Warrington Town, with goals from Jesurun Uchegbulam and Callum Chippendale.

Gladiators boss, Paul Phillips had previously backed his side to challenge for the league’s top spots, with this result sending out a clear statement to the rest of the division.

Phillips will be hoping his team can extend their good form when Gainsborough Trinity travel to Derbyshire on Monday, whilst a trip to Bamber Bridge awaits Warrington.

It was seven heaven for Ramsbottom as they thrashed Market Drayton Town 7-1 with the weekend’s biggest scoreline.

James Murphy hit a hat-trick for Ramsbottom, whilst Domaine Rouse, Kayle Power and Jamie Rainford were also on target for the home side.

Maintaining their strong start to the season with the victory, Lee Donafee will be keen to see his side back up the impressive win with another, when they travel to fellow Greater Manchester outfit Mossley on bank holiday Monday.

Having thrown a two-goal lead away in the second half, Trafford bounced back to topple Bootle in a thrilling 3-2 encounter.

Michael Burke and Ross Davidson had scored for the visitors from Greater Manchester in the first half, before a quick-fire double courtesy of Elliott Hughes and William Bell levelled the score for Bootle.

Alfie Belcher netted 12 minutes from time to secure the Northern Premier League West club’s first win of the season, with Danny Caldecott’s side looking to back it up with another victory when Glossop North End travel to the Shawe View Stadium on Monday.

Mossley kept pace with the leaders in the Northern Premier League West with a convincing 2-1 victory away from home against Widnes.

Anthony Brown opened the scoring for Mossley, with Sewa Marah adding a second midway through the second half.

It looked as if Widnes had found a route back into the tie when Ben Wharton netted with fifteen minutes to play, yet his strike was too little to late as the home side failed to find an equaliser.