There were a whopping 33 goals in just the Northern Premier League alone, as Greater Manchester’s teams in steps three and four of non-league returned to action for matchday nine. 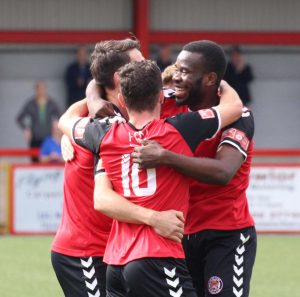 Bradley Holmes 75th-minute strike secured a much-needed victory for FC United of Manchester, as they look to get their promotion challenge back on track.

Despite picking up their first victory of September with the 1-0 win over Bamber Bridge, FC United still remain in the bottom half of the table.

A welcome break from league action is on the horizon for Neil Reynolds, as his side will travel up north to face Blyth Spartans in the FA Cup Second Qualifying Round.

Jack Redshaw score in the 90th-minute to snatch a welcome point for Ashton United at home to fellow-strugglers Grantham Town.

The Robins had trailed courtesy of Jonathan Wafula’s first-half strike, before Nathan Ntalu levelled the match for the hosts.

Grantham had thought they’d won it two minutes later through Harvey Grice, but there was still time for Ashton to strike back.

Stalybridge Celtic took an extra step away from the relegation zone, with an impressive 3-0 away victory against Scarborough Athletic.

Ashley Smith-Brown struck early for Stalybridge, before Shane Killock and Ryan Whitley secured the victory for Celtic in the second-half.

Moving into 16th with the win, Stalybridge will be keen to build on their victory when they travel to Gainsborough Trinity this weekend.

Keogh King as Mossley Match On

Keogh struck midway through the first-half for Mossley, before adding a second moments before half-time.

Max Hazeldine did grab what proved to be a consolation for Trafford, but the victory was wrapped up through Declan Evans’ penalty two minutes from time.

Hyde on the Up with Another Win

Jonah Mitchell scored for Hyde United as they picked up the third win of the Jim Gannon era, with a 1-0 victory over Stafford Rangers.

Striking midway through the second-half, Mitchell’s 65th-minute strike was enough for Hyde to return to winning ways.

Having already been knocked out of the FA Cup, Hyde will return to action against Whitby Town on September 25th.