Barely 48 hours after leaving from the Saturday fixtures, Greater Manchester’s Northern Premier League sides were back for some Bank Holiday Monday action on Matchday Six. 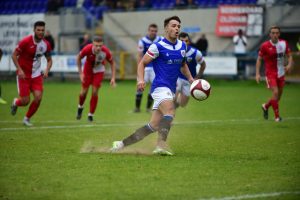 Stepping up to take the spot kick in the third minute of additional time, Stalybridge captain Scott Bakkor pulled out a nonchalant Panenka to steal the win.

It takes the Celts above Ashton in the Northern Premier League Premier table, with FA Cup ties awaiting both sides this weekend.

FC United Bounce Back Against Radcliffe

FC United of Manchester cruised to a 3-0 victory against Radcliffe, putting their disappointing defeat to Hyde United well and truly behind them in the process.

Jamie Cooke opened the scoring for FC United two minutes into the match, with Matty Rain adding a second just before the break. Adam Dodd added a third midway through the second period, whilst Paul Ennis passed up the opportunity to make it four with a missed spot kick.

“The lads did remarkably well, our application and work rate was fantastic. We looked direct and positive in the final third, with a clean sheet to boost”.

It’s a visit to Northern Premier League West side, Bootle FC for FC United in the FA Cup this weekend, with Neil Reynolds men hoping for a lengthy run in the competition.

Mickleover ran out 3-2 winners against Hyde United in an entertaining match that saw the lead shift between the two sides.

Harry Benns had put Hyde in front after 17 minutes, yet a quickfire double from Declan Bacon and Jake Bennet put the hosts ahead just before halftime.

Andy Dales made it three for Mickleover after the break, with Liam Hardy halving the deficit from the spot shortly after, but it proved too little too late for Hyde, who remain in midtable.

Atherton Collieries came from behind to snatch a 3-1 victory at home to Lancaster City, with two late goals enough for the three points.

Carlisle United loanee Sam Fishburn netted his seventh goal in five minutes to give the visitors the lead, before Ethan Kershaw levelled things up in first half added time.

Matty Gillam converted a penalty kick to put the home side in front with 10 minutes to play, before Marcus Cusani sealed the victory for Atherton moments later.

Ramsbottom United continued their winning form with a 3-0 victory Mossley, taking the Greater Manchester side into third place.

Leading 1-0 at the break courtesy of a Will Hall strike midway through the first 45 minutes, the Rams added two more after half-time through James Murphy and Jamie Rainford.

That’s now two wins from two with an aggregate scoreline of 10-1 for Lee Donafee’s side, with Ramsbottom now amongst those at the top of the tree.

Trafford FC maintained their unbeaten start to the season with a plucky 1-0 victory over Glossop North End.

It’s now a couple of wins and a couple of draws to start the season for Trafford, who still hold a game in hand over most of the other sides around them.

Kicking off in earnest with a full fixture list, the Northern Premier ...

Kicking off in earnest with a full fixture list, the Northern Premier ...