For a third time in seven days, teams in the Northern Premier League Premier Division teed off against each other, with some big results in Matchday Three. 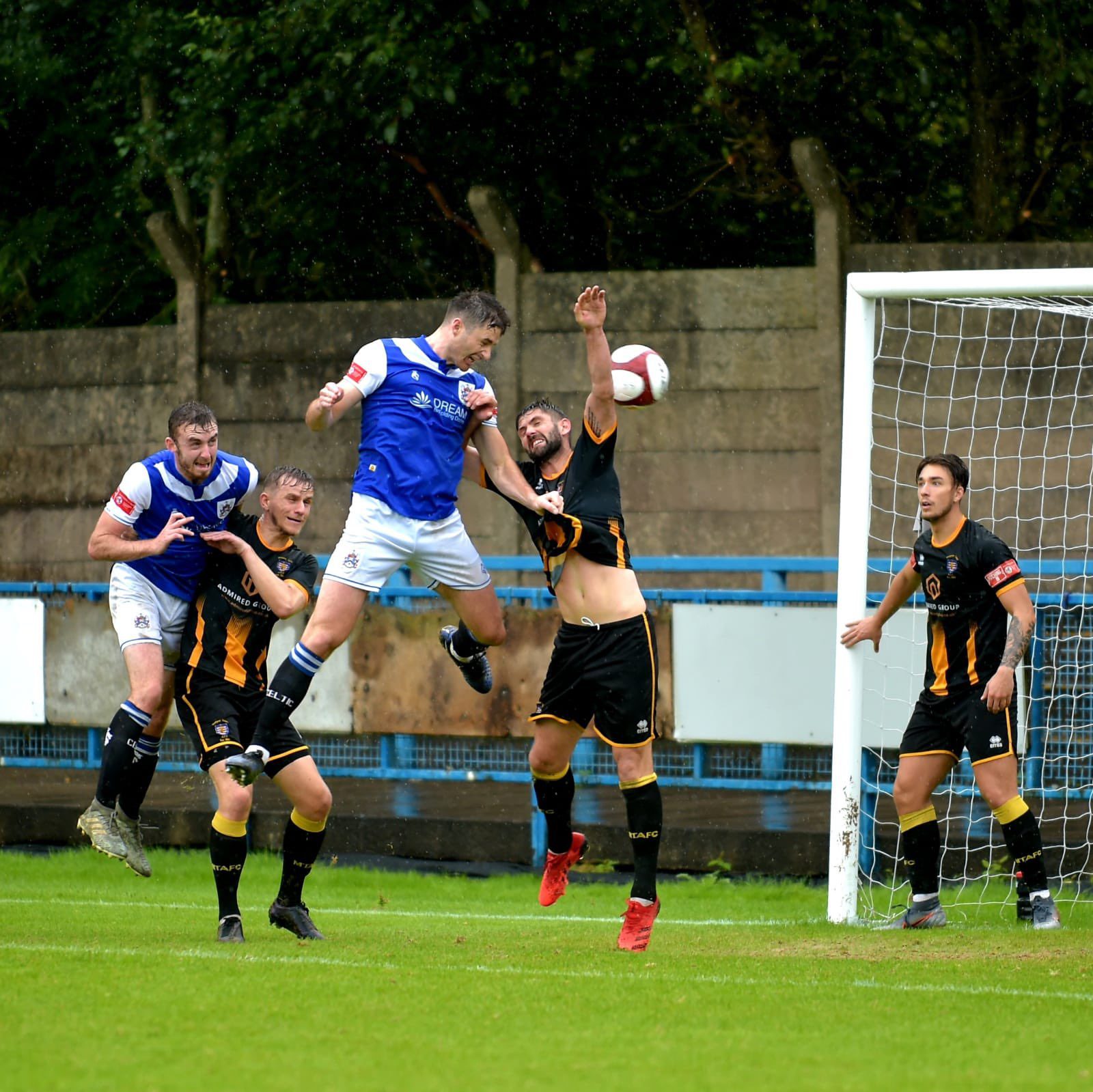 Two of the division’s pre-season favourites, FC United of Manchester and Buxton played out a scrappy 1-1 draw in front of an expectant 1800 capacity crowd at Broadhurst Park.

Goalless throughout the first half, the game came to life in the second period, with the home side taking the lead shortly after the break. Aaron Morris netted for FC United on the 48th-minute mark, before Diego De Girolamo equalising for Buxton 13 minutes from time.

For Buxton, it maintains their unbeaten start to the season, whilst FC United have struggled to get going this campaign and face a difficult test away to South Shields in midweek.

Ioan Evans scored twice for Stalybridge Celtic as the Tameside club sunk Morpeth Town for their first three points of the season.

Scoring both goals with his head in their 2-0 victory, the Stalybridge man’s day was made even better, with the home side also picking up their maiden clean sheet of the campaign.

Morpeth remain bottom without a win, whereas Stalybridge will now look to build on their first victory with a trip to face Lancaster City on Tuesday.

Matlock Make it Two From Two Against Hyde

Matlock Town backed up their first victory in midweek with another strong performance, as the Derbyshire club ran out 2-1 winners against Hyde United.

Reece Kendall opened the scoring for the home side in the second half, with Lirak Hasani adding a second seven minutes from time. Hyde did manage to grab a consolation in the 90th-minute, yet it proved to be too little too late, with United still yet to pick up their first point of the season.

A visit to Nantwich Town awaits Matlock in their next fixture, with Grantham Town the opponents for Hyde.

Seven of the best for Lancaster

Lancaster City recorded the biggest victory of the 2021/22 campaign so far, seeing off Grantham Town 7-2.

Bradley Grayson and Nathan Modest were the Grantham goal scorers, in a humbling day for the Lincolnshire club.

Declan Bacon scored a brace for Mickleover, as they saw off Ashton United 2-1 at Station Road.

Tom Bentham scored late on for the visitors to set up a grandstand finish, yet it wasn’t enough for Ashton as they succumbed to their first defeat of the season.

Ashton will look to bounce back when they host Whitby Town in midweek, whilst Buxton are the opponents for Mickleover.

Atherton Collieries added to their three points from opening day with another victory, this time with a comfortable 3-0 win against Basford United.

Jack Lenehan opened the scoring for the home side, with Marcus Cusani adding a quick-fire second-half double to cap off an impressive afternoon for the Colls.

Warrington Town awaits Atherton in their next match, with Stafford Rangers the visitors to Basford in midweek.

Elsewhere From Around the Grounds

Five different scorers were on hand to give Bamber Bridge a resounding 5-1 victory against Gainsborough Trinity.

Scarborough handed Warrington their first defeat of the season with a 2-0 win for the seaside club and there were also wins for South Shields, Whitby Town and Stafford.