Notts County | Magpies show football can be accessible for all

A record-breaking 12,843 people were in attendance to watch Notts County stroll past fellow-playoff chasers Solihull Moors, whilst setting a new highest total for a crowd in the fifth-tier of English football. 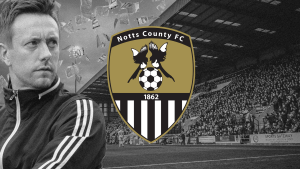 How were Notts able to do it?

Notts County, like many former Football League stalwarts, dropped out of the fourth tier in 2019 and have competed in the National League ever since.

Beaten in the 2019/20 playoff final during their first season in the division, the Midlands-based outfit have flirted with obscurity throughout their non-league stay, until a revival under Ian Burchnall has thrown them back into relevance.

Joining from Swedish club Ostersunds FK in March 2021, Leicester-born Burchnall has brought about a touch of Nordic spirit to the Magpies, culminating in their record-breaking attendance against Solihull Moors.

Having averaged slightly over 6,000 people per home game this season, Notts County recognised there was a large section of their fanbase lying dormant, with crowds upwards of 8,000 people not unusual during their time in the Football League.

Taking advantage of the international break and the subsequent lack of matches across the top two tiers of English football, the club set an initial target to sell 10,000 tickets – when it became apparent this would be achieved, the Magpies set their sights on the National League record.

Having stood relatively untouched since being set by Bristol Rovers in April 2015, the previous record of 11,085 was smashed by Notts County, with close to an extra 2,000 supporters in attendance. 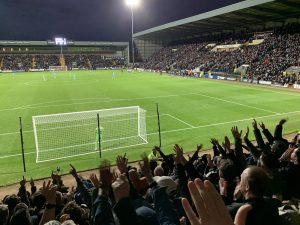 Making football accessible for the masses

Whilst the international break is an unescapable benefit in Notts County’s attempts at breaking the record, it isn’t the standalone factor in their achievement, with the club making a much bigger statement with their approach to selling tickets.

Ticket prices were slashed by the club, with adults able to attend for £5, whilst under-16s were priced at just £1. A clear message that when the cost of football is made accessible by the clubs, supporters will turn up.

For some, the cheap ticketing approach has been a stick to beat Notts County’s achievement with, whilst for others, they’ve claimed most of those in attendance were Nottingham Forest supporters. But even if these claims did have any substance, do they really make any difference?

After all, the decision to set ticket prices at an affordable level for supporters has seen them make headlines across the country, setting a new attendance record in the process and no doubt capturing the imagination of some younger supporters, who will build the fanbase of the club in years to come.

Football take note, this is the way to do it

Having been starved of live sport for the best part of a year, football supporters have returned to stadiums in their droves. Watching the game on the television is so last year, and non-league clubs are thriving as a result.

From 10th-tier FC Isle of Man attracting crowds of 2,000 supporters in their maiden season, to National League South Dulwich Hamlet consistently pulling in over 3,000 fans each week, to the record-breaking 12,000 inside Meadow Lane this weekend, it’s difficult to remember a time when non-league clubs have seen such healthy gate receipts.

With the return of supporters a defining factor in the current state of non-league attendances, the impact on the English game caused by the proposed European Super League breakaway cannot be under-estimated either.

England’s top tier has never felt more disconnected from the rest of the football pyramid and as more and more people turn their back on the Premier League, it makes the decision from Notts County to open their doors to the masses even more important.

The Magpies creating an environment where supporters young or old could experience football in its finest form, through ticket prices that were accessible for the masses, is something that should be emulated, not ignored.

Grimsby Town will be eyeing up an immediate return to the Football ...