Midweek action in the North West Counties Division One North brought points for most of Greater Manchester’s teams. 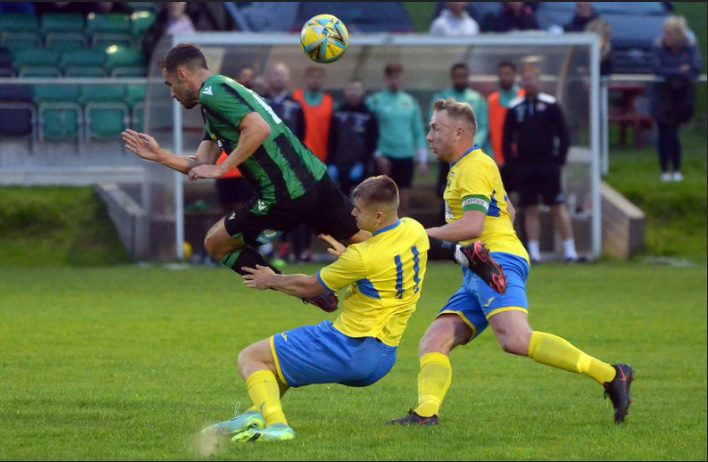 Bury AFC have moved top of the table after winning two games in three days.

The phoenix club played their weekend game on Sunday, with landlords Radcliffe at home on the opening day of their season 24 hours earlier.

They saw off Campion 2-1, with goals either side of half time from Greg Daniels and Tom Greaves. Aidan Kirby’s penalty had given the Yorkshire team a short-term lead, but Daniels equalised within a minute.

Bury travelled to Nelson on Tuesday night, and picked up a 3-1 win thanks to two goals from Lewis Gilboy, and Greg Daniels sealed the win in the second half. Ryan Cattermole scored a consolation for the hosts with a minute left on the clock.

Bury are top of the table with 13 points from an available 15.

Chadderton up to third

Chadderton are maintaining their strong start to the season and are up to third place with a late 2-1 home victory over early strugglers Ilkley Town.

The visitors have yet to score a point, but looked likely to get a draw here. They took the lead through an own goal midway through the first half, before Mark Ashworth drew Chadderton level in the closing moments of the first half.

The game looked set for a draw, but Harry Dean had other ideas and scored a goal five minutes into injury time from 30 yards to give his side another victory.

Chadderton have now won four of their five games, and have already blitzed their points tally from the abandoned 20-21 season where they picked up just five points in seven games.

Ashton Town are up to sixth in the table after crushing Pilkington 4-0 and taking a third straight victory.

A Jamie White hattrick, including a first half penalty, and another goal for Rustam Stepans secured a convincing win.

Town had started slowly with two defeats, but have picked up maximum points ever since.

Atherton Laburnum Rovers are a side going in the wrong direction after falling to consecutive defeats for the first time this season.

Warren Jones’ side travelled across the Pennines but had little to show from their journey after losing 3-0 at Golcar United.

Two goals from Ashley Flynn and one from Buddy Cox gave the home side the win and saw them climb into second place.

This is the first time this season Atherton have failed to score, and they drop to 11th place.

Daisy Hill took a first win at AFC Darwen on Saturday, but it was another defeat on Monday night as they lost 2-1 at home to South Liverpool.

Connor Hughes had put the Westhoughton side ahead just before the break, but the visitors came back into the game and goals from Philip Ojapah and John Keatley ensured the three points went back to Merseyside.

Daisy Hill are 14th with four points on the board.

Three of Greater Manchester’s teams are in action on Saturday.

League leaders Bury travel to Cumbria to take on Cleator Moor Celtic, who raised eyebrows by thrashing St Helens Town 10-0 at the weekend.

Ashton Town look to continue their good run of form at home to Holker Old Boys.

Chadderton travel to Pilkington, with both Atherton LR and Daisy Hill sitting out a week. They’re next back in action on Saturday August 28.