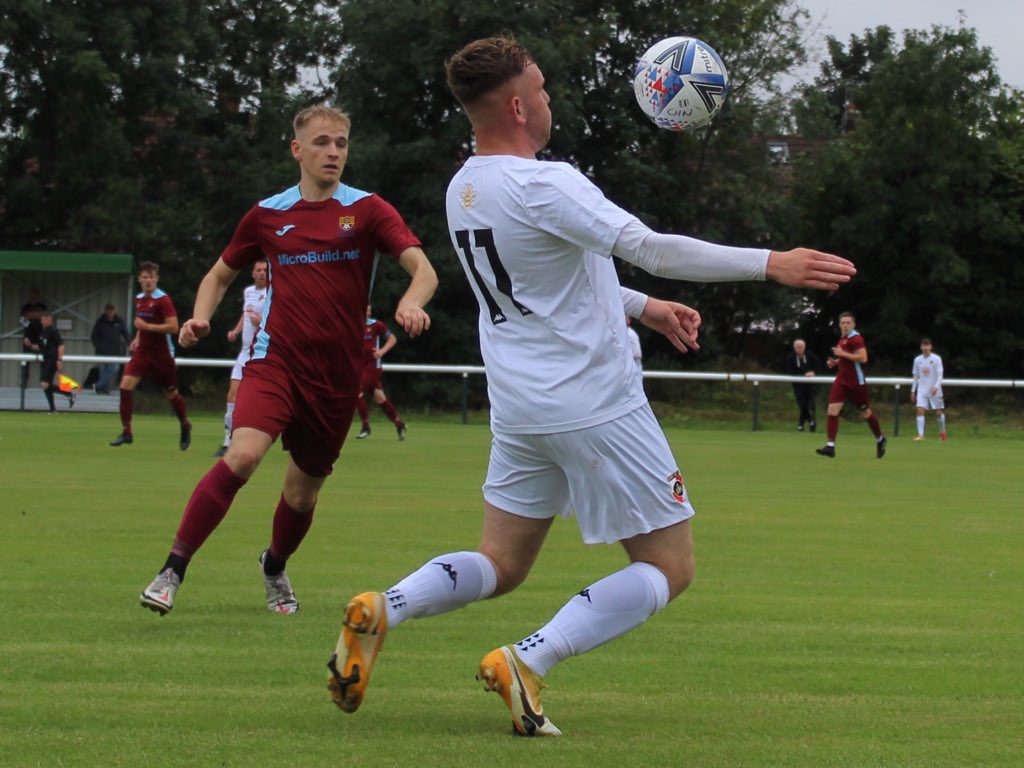 Playing just their second match in the English football pyramid, FC Isle of Man picked up another impressive point away to Wythenshawe Amateurs.

Like they had done seven days ago in their opening match, FC Isle of Man took the lead early on, with a goal courtesy of Luke Murray. Wythenshawe pegged them back shortly after, but the Ravens once again went ahead, this time through Stephen Whitley.

Playing in front of the weekend’s biggest crowd, the Ammies fought back in the second period to deny the Ravens their first win. Still unbeaten so far this season, Dominic Lillie’s goal after 61 minutes was enough to earn a point for Shane Goldrick’s side.

Two second-half goals gave Stockport Town their first win of the 2021/22 campaign, with a convincing 2-0 victory over Eccleshall.

Thomas Beckett and Michael Elstone were on target for the Town, who had started the season in stuttering form, drawing one and losing the other of their opening two fixtures.

Town boss, Matt Jansen had told betting.co.uk that his youthful side needed to show more experience, but this performance against a strong Eccleshall outfit displayed maturity beyond their years.

Table-toppers Ellesmere Rangers and Sandbach United were unable to offer an early-season blow, as the pair played out an attritional 1-1 draw.

Equalising in the 91st minute, Bobbie McDonnell’s strike rescued a draw for Sandbach, who went top of the fledgling NWCFL First Division South table with the result.

Niall Thomas’ second-half goal had given Ellesemere the lead, but the home side was unable to hold on.

Abbey Hey came from 2-0 down to beat Cheadle Heath Nomads 3-2 in a dramatic encounter at the ProSeal Stadium.

Dylan Fitzgerald, Ben Halfacre and Thomas Murray were all on target for Abbey Hey, who moved up into the top half of the table with the win.

For Nomads, they are still awaiting their first points of the season, after a troublesome start to the campaign. Will Shawcross’ brace had given them a seemingly unassailable lead, but a second-half collapse cost the Greater Manchester club.

After a disappointing opening day defeat to New Mills, Cheadle Town have bounced back superbly, making it two wins from two with a 2-1 victory over Rocester.

Goals from Ryan Usher and Patrick Davin helped the Town come from behind against Rocester, who had taken the lead through Alexander Cimino.

Rocester are without a win since their Matchday One victory over Eccleshall and will be hoping to get their season back on track when they travel to Brantingham Road to face Maine Road on Saturday.

Best of the Rest From Matchday Three

Lee Cropper struck twice as Barnton Town came a cropper against Abbey Hulton United, with the side from Stoke comfortable 3-1 winners.

Brocton came out on top in a five-goal thriller against Cammell Laird 1907, with the Staffordshire club triumphing 3-2.