Paul Warne’s Rotherham United side negotiated a tricky looking FA Cup Second Round tie over Stockport County, triumphing 1-0 over the National League club in the pair’s first meeting since January 2011. 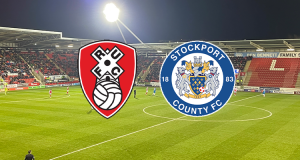 Rotherham grit sees them through

After their televised heroics against Bolton Wanderers in the previous round captured the hearts and minds of the nation, fifth-tier Stockport County’s FA Cup run comes to an end on a chilly night at the New York Stadium.

A spirited effort from the non-league side saw them push the League One leaders close, when on another day they may have been rewarded for their endeavours - the win means Rotherham have extended their club record unbeaten run to 18 matches, whilst Dave Challinor suffers his first defeat as County boss.

Michael Smith swept home at the near post just before the half-time break to give Rotherham the lead against the run of play, after Stockport had the better of the non-goalscoring first-half chances.

It was the 15th goal of a fruitful campaign for the Rotherham striker, who displayed a touch of League One class to break down a stubborn National League defence.

Disappointed to have fallen behind on the brink of half-time, County edged the second period but were unable to convert the chances presented to them. Frustration for Challinor in the Hatters dugout, whose attention will now turn towards securing promotion to the Football League.

With the players at Stockport’s disposal, it was perhaps no surprise to see them take the game to Rotherham in the early stages. Having settled into the tie well, the visitors threatened a number of times, forcing Josh Vickers into two early saves.

Will Collar’s driven effort from 20-yards out produced a sharp save down to Vickers’ right-hand side, before Scott Quigley’s curling strike from just outside the penalty area was tipped over by a full-stretch Millers’ goalkeeper.

Lucky to have still been level, Rotherham were also fortunate not to have been reduced to 10-men midway through the first period. Having broken in behind the Rotherham defence, Quigley was cleared out by Mikel Miller’s high and late tackle.

Unlike the travelling away fans, referee Ollie Yates adjudged the Rotherham man to only be deserving of a yellow card, despite it initially looking as if Mikel’s connection had come above Quigley’s ankle.

When the opener eventually came, it was one of the first openings the home side had fashioned, with Smith’s cute near-post finish deceiving Ben Hinchcliffe in the Stockport goal. A killer blow for the National League side, who had otherwise impressed for much of the half.

League One leaders a step too far for spirited Hatters

Searching for a decisive second goal, the hosts began the second half with a noticeable tenacity, coming close through Chiedozie Ogbene’s rasping 25-yard strike, before Ben Barclay’s goal-saving block denied Freddie Ladapo certain tap-in from inside the box.

In what had evolved into a gripping FA Cup tie, Stockport themselves were not afraid to attack in numbers, with Antoni Sarcevic inches away from prodding into the Rotherham goal.

Relentless pressure from the Hatters continued to produce chances, with Stockport captain Ash Palmer skewing a free-header wide of the Rotherham post.

There would be no such problem for Paddy Madden, whose back-post header was nestled in the bottom corner, but a swift flag from the assistant referee saw the goal ruled out for offside. Disappointment for the Stockport supporters just behind the goal, who warmed up a chilly evening in South Yorkshire with their persistent chanting.

Stockport County of the National League will be in the hat for ...

By his own admission, Muhammadu Faal has encountered an arduous past year-and-a-half. ...