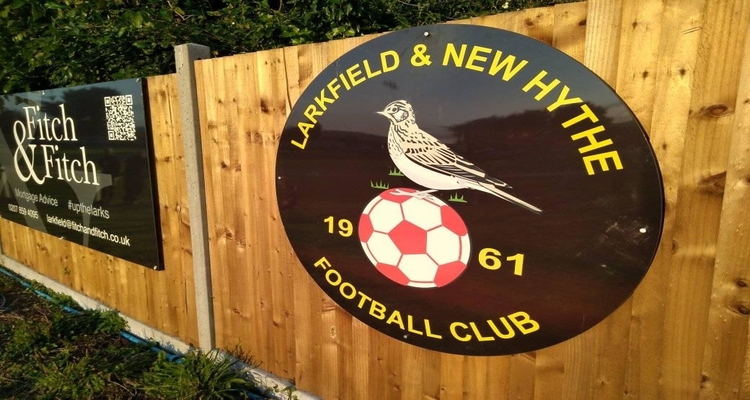 The Southern Counties East League covers teams based in Kent and South-East London. One of the most pleasing aspects of following the SCEL has been to visit the succession of ambitious new clubs that have entered the league in recent years. Modern obligations in Non-League football mean that teams have to make a number of ground improvements to play at this level.

The provision of floodlights, spectator accommodation, perimeter fencing, hard standing and pitch railings are included in the grading requirements. One of the clubs who have stepped up this season are Larkfield & New Hythe, who have massively improved their facilities to join the SCEL from the Kent County League.

Originally founded 60 years ago in 1961, the club now have more than 30 teams catering for men, women, plus youth sides for boys and girls. With all this in mind, I set off on a 140 mile round trip to ‘The Garden of England’.

The name of the Taray Group Community Stadium reflects a major sponsorship deal for Larkfield & New Hythe. Access to the ground is down a lane and the lay-out is very tidy with a smart clubhouse, a 50-seater grandstand on one side of the pitch, a covered terrace for 50 spectators on the opposite side and new dug-outs. There is very good signage in place giving the club a real sense of identity.

A nice 16 page glossy production called ‘The Larks’ which sold on the main gate at £2. In his editorial notes, Larkfield & New Hythe co-chairman Lawrence Coppen summed up the ground improvements and a very positive policy of attracting new supporters.

He wrote: “The club has been transformed with the investment from the Taray Group and from a number of Football Foundation grants. We get a lot of compliments from previous players who wished that the transformation was carried out when they played and who have now become supporters along with other locals.

“…we have built a community status to our club which is evident from the families and the children who visit the club on home games and enjoy the comfort of our new refurbished club house and bar and receive a very warm welcome from our friendly bar staff.”

Larkfield & New Hythe were always in control and took the lead through a Byron Walker penalty on 19 minutes. Charlie Smith added their second eight minutes after the half-time interval.